Difference between revisions of "Tidal energy"

Over the course of a day tidal power varies cyclically from a maximum to zero and back.

Over the course of two weeks tidal power varies between maximum at spring tide and a lower level at neap tide.

It is relatively feasible to compensate for Diurnal variations, e.g. with pumped storage facilities and/or by combining the output of different types of tidal power stations or even stations located where high and low tides occur at different times.

However the amount of storage needed (relative to the power rating of the installation) to even out the variations between Spring and Neap tides to give a constant output is much more of a challenge.

There are two types of tidal power installation:

c. 250GW raw energy
"If we imagine extracting 10% of this incident energy, and if the conversion and transmission processes are 50% efficient, the average power delivered would be 5 kWh per day per person." 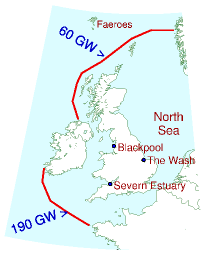 If it can be made to work at scale and cost-effectively the predictability of tidal power gives it a significant advantage over wind and solar PV technologies. Gail Rajgor takes a look at the latest project developments in the sector.

The Tide Is Turning for a New Source of Green Energy Taylor Hill; Take Part; 1 Sep 2016

... two 100-kilowatt turbines have been installed in the turbulent tidal stream of Bluemull Sound off the Shetland Islands—an archipelago about 120 miles north of mainland United Kingdom, where the North Sea meets the Atlantic Ocean. Nova is planning to construct five turbines in the region, providing power to residents and businesses on the Shetland Islands.
0.5 megawatts expected to come online from the underwater turbines
$3.9 million Shetland tidal project

A floating tidal stream turbine off the coast of Orkney has produced more green energy in a year than Scotland’s entire wave and tidal sector produced in the 12 years before it came online.
In 12 months of full-time operation, the SR2000 turbine supplied the equivalent annual power demand of about 830 households.
It produced 3GWh of renewable electricity during its first year of testing at the European Marine Energy Centre.
Over the 12 years before its launch in 2016, wave and tidal energies across Scotland had collectively produced 2.983GWh, according to Ofgem.

Guest post by Alex Terrell, who along with Andy Dawson wrote the series of “UK electricity 2050” guest posts Energy Matters published in 2016. Alex outlines an approach to constructing the Severn Barrage that replaces high-tech turbines with low-tech water wheels and which offers potential for increased output, lower costs and reduced storage requirements.

Electricity from tidal power, as being developed and proposed in the UK, suffers from two main problems: A high cost of production, and a high level of intermittency. For example, the Swansea tidal lagoon is an average strike price of £89.90 per MWh over 90 years.

Tidal energy expert Rod Rainey (and here) has outlined a proposal that could at least solve the cost issue. This is for a chain of steel breast shot water wheels (see description below), stretching from Hurlstone Point (just west of Minehead) across the Bristol Channel to Nash Point. Being further out to sea (further west) than previous proposals, the scheme could generate an average power of 4GW, or 35 TWh per year. This is approximately 10% of the UK’s electricity consumption, and would be the world’s sixth largest hydroelectric scheme by annual output.

A modularised, light weight steel construction produces 4 times as much power per ton of steel compared to offshore wind farms. An initial cost estimate suggests production of electricity at below £25/MWh.

This price is for a highly variable output (between minus 0.25GW and plus 13.8GW). However, there are opportunities to develop a pumped storage system very close to the proposed barrier, and this could be used to smooth the output to some extent, whilst still providing electricity at a competitive price.

“I was appointed in May 2016 to assess the strategic case for tidal lagoons, and the role they could play in the UK’s energy mix.

“I believe that the evidence is clear that tidal lagoons can play a cost effective role in the UK’s energy mix and there is considerable value in a small (less than 500 MW) pathfinder project. I conclude that tidal lagoons would help deliver security of supply; they would assist in delivering our decarbonisation commitments; and they would bring real and substantial opportunities for the UK supply chain.

“Most importantly, it is clear that tidal lagoons at scale could deliver low carbon power in a way that is very competitive with other low carbon sources.

“The aim now is that we should move to secure the pathfinder project as swiftly as possible, so the learning opportunities it offers can be maximised. I have, however, also concluded that the smaller pathfinder project needs to be operational before we move to larger scale projects. This means that a clear long-term Government strategy in favour of tidal lagoons will be required if the full supply chain and cost reduction opportunities are to be realised.

“Tidal lagoons can be an important and exciting new industry for the United Kingdom. We are blessed with some of the best resources in the world, which puts us in a unique position to be world leaders.

“The costs of a pathfinder project would be about 30p per household per year over the first 30 years. A large scale project would be less than 50p over the first 60 years. The benefits of that investment could be huge, especially in South Wales, but also in many other parts of the country. Having looked at all the evidence, spoken to many of the key players, on both sides of this debate, it is my view that we should seize the opportunity to move this technology forward now.”

The report makes over 30 recommendations for delivering a tidal lagoon auditory bringing maximum benefit to the UK, including:

In the course of the Review Charles Hendry and his Review Team visited Swansea, Cardiff, Newport, Liverpool, Bristol and Sheffield. This enabled him to speak directly to people who would be involved in, or affected by proposals for tidal lagoons. The Review received almost 200 responses to the Call for Evidence.

Charles Hendry, former energy secretary, published his long awaited report on the Swansea Bay tidal lagoon power station last week coming down in favour of the project. Hendry’s report is comprehensive but has one key omission. It does not ask if tidal lagoons can provide renewable base-load power in the UK as is often claimed. I set out in a positive frame of mind to show that it could, but failed miserably in that attempt. Facts defeated me.

Scientists working at The University of Liverpool and the NERC Proudman Oceanic Laboratory have developed elegant computer simulations of electricity generation from tidal barrage and tidal flow power stations deployed in the Severn Estuary and the East Irish Sea. The models show that no combination of tidal system from this area can produce continuous and uniform base-load generation. Despite this, these workers conclude that it can. Adding pumped storage hydro provides an economical and practical way to smooth out daily fluctuations but cuts peak output power by over 50%. Large-scale deployment of tidal stations will modify coastlines that deploying renewable energy is supposed to prevent.

A Trip Round Swansea Bay Roger Andrews; Energy Matters; 25 May 2015

“Tidal Lagoon Swansea Bay plc is developing a 320MW tidal lagoon power project in Swansea Bay. The company aims to begin construction in the first half of 2015 with first power generation in the second half of 2018. The Swansea Bay project is the first of a pipeline of tidal lagoon power projects identified by the parent developer Tidal Lagoon Power plc (TLP), with five subsequent full-scale lagoons at various stages of development which could be operational by 2023. TLP anticipates that the total potential electricity generation from this pipeline could match or exceed 25TWh/year … equivalent to around 8% of UK electricity demand.”

What do we know about the Swansea Bay Tidal Lagoon project? One thing is that as a stand-alone project it’s neither efficient nor cost-competitive. With an installed capacity of 320MW and annual generation of 495GWh it has a load factor of only 18%, about half that of offshore wind. A report by Poyry estimates capital costs at £913 million (£2,853/kW), a levelized electricity cost of £150/MWh and a strike price of £168/MWh, much higher than the £92.50/MWh strike price at Hinkley Point. The strike price is, however, projected to decrease to parity with Hinkley for the much larger Lagoon 3, which is scheduled to be operational in 2023.

Concern over the costs of a £1.3bn tidal lagoon project planned for Swansea have resurfaced after its developer admitted that they remain well above the price of other energy technologies.

Mark Sharrock, the boss of Tidal Lagoon Power, told a committee of MPs that he would need a deal offering financial support of £89.50 for every mega-watt of electricity produced to build the groundbreaking 320MW project.

But under questioning he admitted that this could only be achieved with extra financial help from the Welsh Government, and a contract almost double the length than what is typically offered to developers of new nuclear or renewable energy projects.

On a like-for-like basis the Swansea Tidal project would need a contract price of £150/MWh. The sum is well above the eye-watering price of the Hinkley Point C nuclear power project which will cost bill payers £92.50 for every megawatt produced over 35 years.

It is also almost triple the price of the newest offshore wind power projects which will be built for £57.50/MWh.

“Cardiff Tidal Lagoon is now being developed as the first full-scale lagoon in our programme. With a potential installed capacity of around 3GW, this project could provide enough green, clean home-grown power for every home in Wales.” Mark Shorrock, Chief Executive, Tidal Lagoon Power. In this post we investigate this claim. The results, as usual, are predictable.

It will have a nominal capacity of around 3GW – the official number is 3.24GW – and is estimated to cost around £8 billion. Production will be approximately 5.5TWh per year (giving a capacity factor of around 20%).

Brittany, peak output at 240 megawatts and average 57 megawatts, a capacity factor of approximately 24%.
The power density is of the order of 2.6 W / m². The cost of electricity production is estimated at 12 eurocents of kWh.

Bay of Fundy to get tidal power turbine next month The Star; 19 May 2016

“Our project aims to deploy two two-megawatt hydro devices at the Fundy Ocean Research Centre for Energy (FORCE) site, just west of Parrsboro, and we’re aiming to put both of those turbines in the water this year”. The turbine ... is 16-metres in diameter and weighs 1,000 tonnes

The tides in Nova Scotia’s Minas Basin at the top of the Bay of Fundy, are among the most powerful in the world.
In the end they proved too powerful for state of the art technology.
A multi-year pilot project to harness that power using giant 5-storey turbines to convert the energy to electricity has come to an end.
Over several years, the giant turbine had been damaged, and repaired until late this year the various companies involved said it had been damaged irreparably Earlier this year partner firms had announced they were pulling funding, then the parent company in Ireland filed for bankruptcy.
Now comes word that as winter is upon us, the 1,300 tonne turbine will have to remain on the seabed until at least March of next year.
As the various companies involved are under bankruptcy protection, who will remove the turbine, pay for it, and the eventual cost of doing so, all seem to be unknown at this point.
Many subcontracted companies are also owed millions of dollars in total.