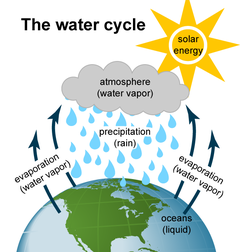 Techniques for extracting energy from water are generally classified as either dam-based or run-of-river, depending whether a reservoir of water is created or the flow of an existing watercourse is tapped. Mechanical devices for extracting energy include water wheels, as found in antique water mills, Archimedes screws (found in some run-of-river schemes), turbines and Pelton wheels. 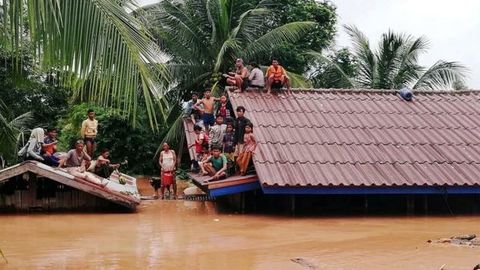 Flood victims on roofs of houses in Laos after dam collapse

Hydro dams are mostly quite safe, but when they do go wrong they can be very dangerous: the world's worst energy disaster (massively worse than Chernobyl) was the collapse of the Banqaio dam which killed around 200,000 people and made about 12 million homeless. Other dams are also at risk, such as Mosul in Iraq, whose collapse could kill around a million people, and the Kariba dam between Zambia and Zimbabwe, which puts the lives of 3.5 million people at risk. In 2018 the collapse of a dam in Laos killed at least 20 people and left 6,000 homeless[1].

Building dams often floods homes and displaces communities, and has large ecological impacts, especially downstream where patterns of river flow and flooding are disrupted by the dam. Silt carried in the river feeding the dam can also deposit in the dam reservoir, reducing its storage capacity. Climate change is likely to alter patterns of rainfall and is already impacting hydroelectric production in some parts of the world.

Justin Bowles' comments in a thread on hydropower (corrected for typos)

Second, the hydro consultants generally base generation numbers on far too optimistic assumptions. I am undecided as to whether this is due to a) wilful fraud (they get fat commissions for projects that go ahead, however 'dodgy' they are or b) because they are basing their flow assumptions on historical river flow data that has been rendered unreliable by climate change.

People forget that hyrdo projects not only suffer from too little water but also too much. When there is a lot of water in a river, the head generally gets smaller. Given that we have been experiencing either feast or famine in river levels over the last decade or so, this is a major problem for projects that assume that most of the time the river is in the sweet spot of not too much but not too little water.

Third, 'shit' happens and this never seems to be conservatively accounted for in the generation numbers. And the 'shit' that happens can be monumental. You would think that the technology is pretty robust with a bloody great Archimedes screw or two and a generator. A common problem is that the intake mesh gets perpetually clogged, so you often need permanent volunteers to clear it of crap like branches or police cones that a passing yob may have thrown into the river. Given these projects have a 20-25 years life, you need pretty dedicated volunteers who are prepared to go out in mid-winter to clear the crap away. Often their enthusiasm falls after a season or two. If you pay someone to do this it plays havoc with your returns. Worse, sometimes stuff gets through the grille and clogs the screw (like a dead sheep, I kid you not). Another problem some of these projects face is that the bearings go on the screw. That costs loads of money to fix.

There was one project, Stockport Hydro, that I thought was actually hitting its numbers and it even paid a dividend (they all promise to do this after a couple of years or so after commissioning but few have actually had the money to afford a dividend). The the concrete plinth cracked holding one of the screws, so putting half of their generating capacity out of commission for a whole year. As I say, shit happens.