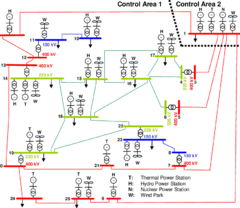 schematic of part of a large grid

Electricity grids can be extremely complex, with thousands of generators supplying millions of consumers via an apparent spaghetti of power lines running all over the place, at multiple different voltages[1]. Managing the complexity of such systems is a significant engineering challenge[2]. 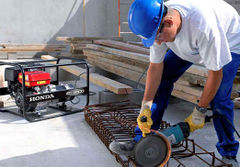 a generator and a power tool

Whether we have a tradesperson with a power tool plugged into a generator on a building site, or energy from a wind turbine in Scotland helping to run a light bulb in Sicily, unless there is always exactly as much power being generated as power being demanded the system will not work properly: voltage will rise – which can damage equipment – or drop, causing brown-outs or black-outs.

In a big (e.g. nation-wide) grid where there may be millions of consumers with tens of millions of appliances which can be switched on or off at any moment it is obviously impossible to know exactly how much power will be demanded at any instant, but fortunately the inertia of the huge spinning generators in big power stations smooths out short (second to second) fluctuations, and the people managing the grid have resources like hydro-electric and pumped hydro generators which can be turned up and down quickly enough to compensate for minute-to-minute fluctuations. Lastly there are slower-reacting gas, oil, coal and biomass generators which can be turned up and down to compensate for hour-by-hour fluctuations[3].

Forecasting demand for electricity from minute to minute, day to day, and year to year is vital to reliable operation of electricity grids. Short term fluctuations in demand tend to be predictable diurnal variations – peaks in the morning when people get up to go to work, and in the evening when they return – and those caused by popular events broadcast on TV, where people turn on their kettles en masse at the end of a programme.

In the past this mix of generators and consumers has proved manageable. However increasing the amounts of wind, solar, wave, and other Variable Renewable Energy (VRE) sources poses challenges to managing grids, because:

With increasing amounts of VRE, forecasting demand also has to factor in fluctuations in wind, cloud, and the diurnal fluctuations of the sun.

Another challenge is that as the penetration of a VRE approaches its Capacity Factor (around 30% for wind or 10% for solar in latitudes such as the UK and Germany) the situation arises where if the VRE is generating its full output it can supply the entire demand of the grid, so every other generator has to turn off to accommodate it, but the other generators have to remain on standby to pick up the load when the wind falls or the sun goes down etc and the VRE's generation drops off again. This is very challenging for other generators, especially when the transition occurs quickly (as in the Duck curve), and even where it is possible, it may result in them operating less efficiently.

The solutions to these problems tend to be based on storage. Big "grid scale" batteries can produce or consume short bursts of energy to provide the equivalent of the inertia of huge spinning generators. The biggest of these so far is the Big South Australian Battery, made by Tesla and reputedly costing around 50 million US Dollars. It can produce (or consume) 100 Megawatts, which it can sustain for about an hour from fully charged. However even this huge battery is puny in comparison with the output of a large power station, which is of the order of a Gigawatt (1000 Megawatts). If this battery were able to provide that level of power it would run flat in a few minutes.

Far greater power and capacity can be delivered by pumped storage, which can have power outputs of Gigawatts – similar to large power stations – and can sustain such powers for hours at a time. However sites suitable for building pumped storage are limited.

Other storage technologies exist, and more are being developed, but none currently comes close to pumped storage in capacity.

A 2019 report on the challenge of integrating 70-80% of the UK's power from wind and solar power by 2050 finds that a storage capacity of around a third of peak electricity demand is required. This could be a huge challenge since the UK currently has only 3GW of storage, but will need to increase it to 30GW[4].

"Energy Demand Forecasting in a Rapidly Changing Landscape" by Penny Hitchin (15 Dec 2017) [1] discusses how system operators match electricity supply and demand, and how changing conditions are forcing them to adapt to a shifting grid.

ANALYSING TECHNICAL CONSTRAINTS ON RENEWABLE GENERATION TO 2050 A report to the Committee on Climate Change; Mar 2011

California could boost its solar and wind energy output by nearly 50 percent and reduce volatility just by planning where new plants are installed, according to a Stanford economist. Solar and wind developers tend to cluster installations in locations that offer the highest revenues, said Frank Wolak, director of Stanford University’s Program on Energy and Sustainable Development. But these same locations accentuate volatility, raising the peaks when all are producing and deepening the troughs when all shut down.

Europe gets so much of its energy from renewables that many leading countries are now facing a new problem: updating their energy grids to handle it all.

The Energy Research Partnership has undertaken some modelling and analysis of the GB electricity system in the light of the carbon targets set by the Committee on Climate Change. Firstly a brief examination was made of the German and Irish markets with the hope of learning from their advanced penetration of variable renewables. Secondly a new model, BERIC, was written to simultaneously balance the need for energy, reserve, inertia and firm capacity on the system and its findings compared with simpler stacking against the load duration curve. The intention was to assess the need for flexibility on the system but some broader conclusions also emerged: A zero- or very low- carbon system with weather dependent renewables needs companion low carbon technologies to provide firm capacity

The modelling indicates that the 2030 decarbonisation targets of 50 or even 100 g/kWh cannot be hit by relying solely on weather dependent technologies like wind and PV alone. Simple merit order calculations have backed this up and demonstrated why this is the case, even with very significant storage, demand side measures or interconnection in support. There is a need to have a significant amount of zero carbon firm capacity on the system too - to supply dark, windless periods without too much reliance on unabated fossil. This firm capacity could be supplied by a number of technologies such as nuclear, biomass or fossil CCS

The breakthrough is a business model used to integrate distributed energy technologies into the mainstream electric grid.

For the first time in the history of the modern power grid, a non-utility, non-RTO entity called GridSolar is managing a part of the electric power grid. This would be illegal in any state other than Maine. GridSolar is demonstrating the value distributed generation, demand response and energy efficiency can provide to the power grid and ratepayers. In the process, it is turning the central argument made by utility trade groups against distributed energy on its head. Rather than imposing additional costs on ratepayers, distributed energy can significantly reduce the economic burden borne by ratepayers.

As wind and solar power provide a growing share of Europe’s electricity1, understanding and accommodating their variability on multiple timescales remains a critical problem. On weekly timescales, variability is related to long-lasting weather conditions, called weather regimes2, 3, 4, 5, which can cause lulls with a loss of wind power across neighbouring countries6. Here we show that weather regimes provide a meteorological explanation for multi-day fluctuations in Europe’s wind power and can help guide new deployment pathways that minimize this variability. Mean generation during different regimes currently ranges from 22 GW to 44 GW and is expected to triple by 2030 with current planning strategies. However, balancing future wind capacity across regions with contrasting inter-regime behaviour—specifically deploying in the Balkans instead of the North Sea—would almost eliminate these output variations, maintain mean generation, and increase fleet-wide minimum output. Solar photovoltaics could balance low-wind regimes locally, but only by expanding current capacity tenfold. New deployment strategies based on an understanding of continent-scale wind patterns and pan-European collaboration could enable a high share of wind energy whilst minimizing the negative impacts of output variability.

Weatherwatch: can we keep the lights on when the wind fails to blow? Kate Ravilious The Guardian; 9 Jan 2018

Rapid growth in both solar and wind (the UK now has more offshore wind power capacity than any other country in the world) has enabled the UK to achieve these impressive statistics, but will the rise in renewables also make UK power more vulnerable to the whims of British weather?

Researchers working on the European Climatic Energy Mixes project have been investigating future risk by assessing how the UK would fare with a repeat of the unusually cold winter of 2009-10. From mid-December 2009 a southward-displaced jet stream allowed cold air to pour in from eastern Europe, bringing widespread snow and plunging temperatures. The mean UK temperature for the entire winter was just 1.5C, the lowest since 1978-79 when it was 1.2C . As a result power demand surged, with electricity consumption between 10 and 20% above average on a number of occasions.

Back in 2010 renewables provided less than 10% of UK electricity. But similar weather now might create a strain. “The low wind conditions in a repeat of winter 2009-10 would lead to a substantial reduction in wind power production over the season, which could lead to increased risks to electricity supply availability when combined with an increased demand due to low temperatures,” writes meteorologist Emma Suckling from the University of Reading. Winters like this might be getting rarer, but we still need a contingency plan when the wind fails to blow.

China is proposing a $50+ trillion global energy grid. Global Energy Interconnection (GEI), a vision of a world power grid, was outlined by the State Grid Corporation of China ("State Grid"). It would be based upon a global network of Ultra High Voltage power lines connecting global power generation including massive wind farm at the North Pole and solar power from equatorial areas to energy users around the world.

This is the first of a two-part series, excerpted and edited, from a speech by Zhenya Liu, chairman of the State Grid Corp. of China, delivered recently at IHS CERAWeek in Houston.