Can nuclear co-exist with wind and solar?

From ScienceForSustainability
(Redirected from Can reactors react?)
Jump to navigation Jump to search

It is sometimes claimed that nuclear energy, or baseload generation in general, is unnecessary or even detrimental to decarbonising a grid containing significant amounts of intermittent renewables such as wind and solar.

For example "Can reactors react" is a discussion paper by Craig Morris published by the Potsdam Institute for Advanced Sustainability Studies (IASS) in January 2018. The paper's subtitle is "Is a decarbonized electricity system with a mix of fluctuating renewables and nuclear reasonable?" The paper discusses issues of whether, or how flexibly, nuclear power plants can ramp their outputs down (and back up again) and whether baseload energy generation conflicts with intermittent wind and solar. It concludes

As France shows, we can have deep decarbonization based largely on nuclear. No country yet proves that the second combination – wind and solar – will work, but all signs indicate that such scenarios are becoming more feasible by the year – while nuclear becomes increasingly irrelevant, even in France.

The third option – the much touted “balanced” mix of nuclear with wind and solar – is a chimera. No country will ever demonstrate that nuclear is a good complement for wind and solar unless some future reactor design ramps like current gas turbines at a competitive price. Germany is widely criticized for abandoning its experiment to mix wind, solar and nuclear in 2011.

But such critics incorrectly assume that this mix will work. France is now poised to conduct its own experiment, and it is unlikely to go well. The real threat to the dream of a balanced mix of nuclear, wind and solar is thus not Germany’s Energiewende, but the French transition énergétique.

Can reactors react? This paper finds that nuclear reactors cannot to the extent needed for a significant share of wind and solar. Nuclear, or wind and solar? We have to choose.

(Morris does not explain why an unproven solution should be preferred over a proven one.)

In this new "discussion paper," energy journalist @PPchef takes great pains to demonstrate that nuclear power is too inflexible to pair well with wind & solar in a "decarbonized energy system" & thus must be discarded "to make room" for more #wind & #solar publications.iass-potsdam.de/pubman/item/es…

I'm going to defer technical discussion of whether nuclear plants (old and new) can ramp or change output to match fluctuations in net demand and contribute to system reliability/flexibility until my paper is released (short answer: they certainly can if doing so is valuable)...

Instead, I want to focus this thread on how the entire reasoning behind the argument that nuclear must go to make room for wind + solar is backwards and spurious and has nothing to do with decarbonizing electricity (and everything to do w/manufacturing reasons to shutter nuclear)

This is common refrain of supporters of Germany's Energiewende, including @ppchef, as well as US-based proponents of a "soft energy path" to decarbonization such as RMI's Amory Lovins. So it is worth pausing to unpack the (spurious) logic for a moment.

Let's walk through an example: here is a week of hourly operations of a hypothetical power system with 2/3rds of its energy from low-carbon sources: 1/3 each from nuclear and wind + solar. Start by assuming the nuclear is entirely inflexible and must run at 100% at all times.

In this case, available wind & solar energy only exceeds demand minus nuclear output in only 2 hours before 12 on the 1st day. This "overgeneration" is enough to supply just 0.2% of the weekly demand. That energy must be either curtailed (wasted), exported or stored for later use

That shouldn't be too much of a problem. So already we have a 66% low-CO2 grid and little conflict between the 33% nuclear and 33% wind and solar. A tiny bit of storage or transmission interconnection with other grids or in the worst case, a little curtailment, and you're all good

What if we want to go to 80% low-CO2? Look at the next example pictured here. We have 33% nuclear + 47% wind/solar. Nuclear is still entirely inflexible and now overgeneration is more common, totaling 2.8% of demand to be stored, exported or curtailed. But no big problems really. 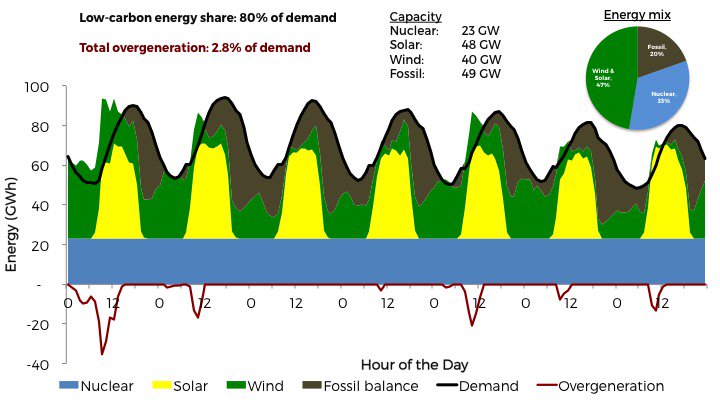 We can do even better though if nuclear is somewhat flexible. Now let's assume nuclear can ramp down to 50% of its maximum output. Much less flexible than a gas plant, but helpful still. Overgeneration is down to a minor 0.7% of demand. Wind+solar up to 49%, nuclear down to 31%. 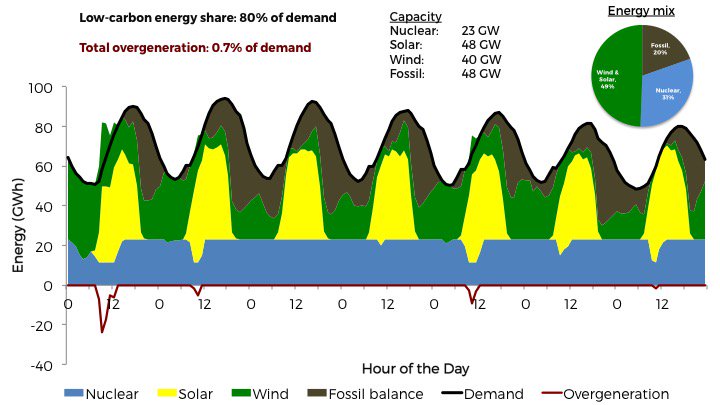 Curtailment of wind/solar falls by ~75%. This flexible nuclear example will thus be lower cost overall, because we can use more of the free energy from wind + sun here without exporting, storing or curtailing it.

In addition, nuclear reactor owners make more money, because they are ramping down output when there is an excess of wind and solar and thus market prices are $0/MWh or even negative. They can then sell their spare capacity as operating reserves/balancing which makes more money.[1]

So a win-win-win outcome with only modest nuclear flexibility: 1) lower wind & solar overgeneration, 2) lower overall system costs, and 3) higher revenues for nuclear operators. (Foreshadowing here for my forthcoming paper's findings!) And we're at an 80% decarbonized grid.

What happens if we head advice of @PPChef & others who counsel that we must get rid of nuclear to make room for more output from wind & solar and avoid having to export, store or curtail excess wind or solar output? Let's take the nuclear out of the above example in this graphic. 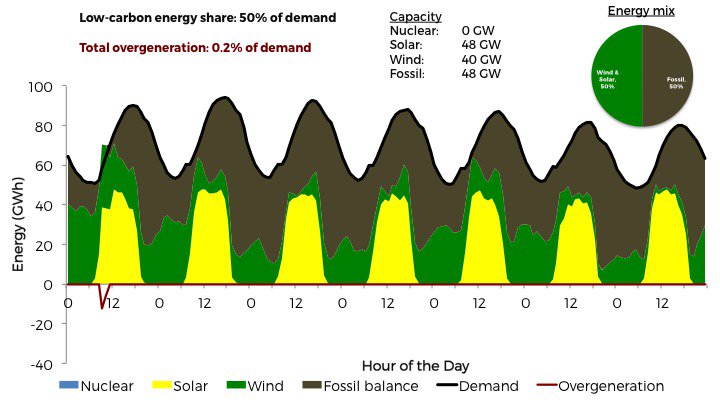 So score one for wind and solar, just as @PPChef envisions. But what happens to emissions? Now that we've gotten rid of our nuclear units, the fossil energy share (coal, lignite or gas plants) needed to balance the wind and solar rises sharply to 50%, up from only 20% previously.

So we've managed to get an addition 1-3% energy share from wind and solar compared to the cases with nuclear in the mix, but at the cost of a net loss of 30% low-carbon energy share. This mix is only 50% decarbonized, vs 80% if we kept nuclear around.

Sound familiar? Well that's exactly what has happened in Germany as nuclear units have gone offline as part of the Energiewende's misplaced priorities, and it is also what is likely to happen elsewhere if the advice of Energiewenders or soft energy path advocates is headed.

.@PPChef is working hard to find reasons why wind & solar cant get along w/nuclear and create another reason to justify nuclear retirements. But if decarbonizing the power system quickly & affordably is your goal, that argument holds no water, whether nuclear is flexible or not!

If you don't want nuclear in your energy mix, it's fine to just say so and have an open debate about it. If you want to maximize wind & solar at any cost, no matter if it means higher CO2 emissions and more gas, coal or lignite burned, go for it.

But don't claim your arguments for getting rid of nuclear have anything to do with transitioning to "a decarbonized electricity system" as @PPChef's discussion paper is subtitled.

Getting rid of a reliable low-carbon resource that runs nearly 24-7 to make room for more intermittent wind & solar output which must be backed up with fossil generators at all other times is obviously a bad deal from a CO2 perspective, and the examples above clearly show that.

Finally, note it gets even easier to integrate wind & solar with nuclear (flexible or otherwise) if you have all of the energy storage, demand-side flexibility, power to gas and other flexibility measures the Energiewende requires. There's no technical reason to discard nuclear.

I'll be back in a couple weeks to talk more about this. But in the meantime, next time someone tells you nuclear has to go to "make room for wind & solar," ask them what that will mean for total CO2 emissions & fossil energy consumption? You're not going to like the answer. /End

The slideshow display below may make it easier to compare the graphs above: