Chapter 7 of IPCC Working Group 3's current assessment report (ar5) discusses their findings which are presented in Figure 7.6 on page 539: 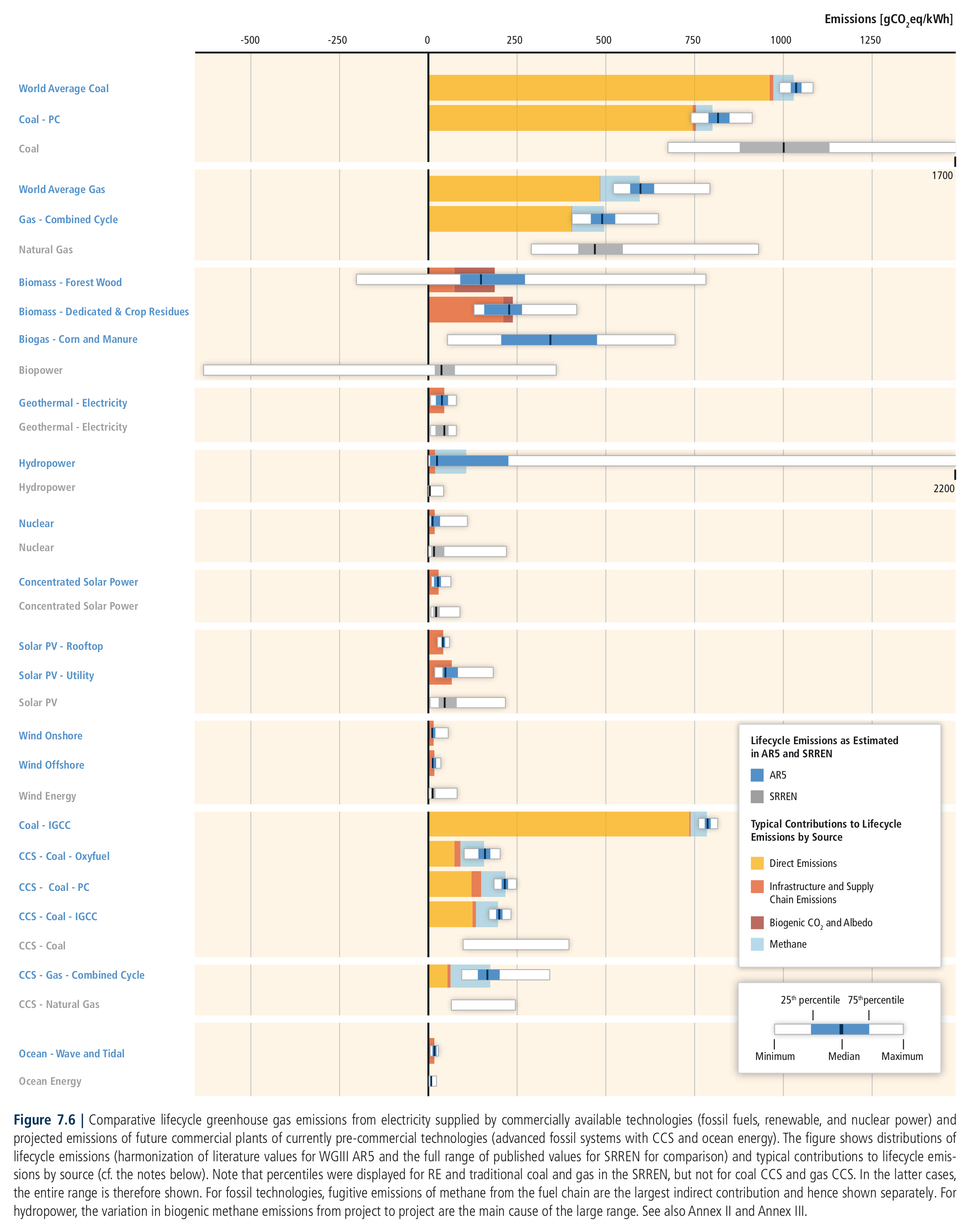 Measures of Carbon/emission intensity can also be assessed for activities other than energy production, for example per country. Wikipedia discusses methodologies and data.

In 2014, the Intergovernmental Panel on Climate Change harmonized the carbon dioxide equivalent (CO2e) findings of the major electricity generating sources in use worldwide. This was done by analyzing the findings of hundreds of individual scientific papers assessing each energy source.

For all technologies, advances in efficiency, and therefore reductions in CO2e since the time of publication, have not been included. For example, the total life cycle emissions from wind power may have lessened since publication. Similarly, due to the time frame over which the studies were conducted, nuclear Generation II reactor's CO2e results are presented and not the global warming potential of Generation III reactors, presently under construction in the United States and China. Other limitations of the data include: a) missing life cycle phases, and, b) uncertainty as to where to define the cut-off point in the global warming potential of an energy source. The latter is important in assessing a combined electrical grid in the real world, rather than the established practice of simply assessing the energy source in isolation.

We tallied the CO2-eq impacts at six stages in a power plant’s lifecycle: 1) upstream, 2) on-going, non-combustion, 3) power generation, 4) carbon sequestration, 5) fugitive methane emissions and 6) downstream. Not all stages applied to every power plant and were omitted from an individual power plant’s charts if they did not apply, e.g., CCS for a non-CCS plant. Data for 1-3 and 6 were taken from NREL’s harmonization of life cycle analysis studies summarized in Table C-1 of Volume 1 of the Renewable Energy Futures Study. That study described the categories as follows. Upstream includes “emissions resulting from raw materials extraction, materials manufacturing, component manufacturing, transportation from the manufacturing facility to the construction site, and on-site construction.” Ongoing non-combustion includes “fuel cycle emissions (where applicable) and emissions resulting from non-combustion-related O&M activities.” Power generation includes emissions “from combustion at the power plant (where applicable) for the purpose of electricity generation.” Downstream includes “emissions resulting from project decommissioning, disassembly, transportation to the waste site, and ultimate disposal and/or recycling of the equipment and other site materials.” Carbon capture and sequestration values are assumed to reduce combustion CO2 by 90%, but CCS plants have more up and downstream embedded emissions because of their larger amount of on-site capital. Fugitive methane emissions were calculated based on the heat rate of the power plant and an assumed 1% leakage rate in US natural gas infrastructure. A global warming potential of 30 was used to convert the leaked CH4 to CO2-eq.

The research, published in Nature Energy, measures the full lifecycle greenhouse gas emissions of a range of sources of electricity out to 2050. It shows that the carbon footprint of solar, wind and nuclear power are many times lower than coal or gas with carbon capture and storage (CCS). This remains true after accounting for emissions during manufacture, construction and fuel supply.

“There was a concern that it is a lot harder than suggested by energy scenario models to achieve climate targets, because of the energy required to produce wind turbines and solar panels and associated emissions,” explains project leader Dr Gunnar Luderer, who is an energy system analyst at the Potsdam Institute for Climate Impacts Research (PIK).

Luderer tells Carbon Brief: “The most important finding [of our research] was that the expansion of wind and solar power…comes with life-cycle emissions that are much smaller than the remaining emissions from existing fossil power plants, before they can finally be decommissioned.”

Carbon debt
Critics sometimes argue that nuclear, wind or solar power have a hidden carbon footprint, due to their manufacture and construction. This large “carbon debt”, and the related debt of energy, must be paid off if they are to cut emissions over their lifetime.

Factories churning out solar panels use large amounts of electricity, often sourced from coal-fired power stations in China. Wind turbines and nuclear plants need a lot of steel and concrete. And the centrifuges that separate nuclear fuel also rack up a big electricity bill.

Yet zero-carbon sources of electricity are not the only ones to have a hidden, indirect carbon and energy footprint.

For coal and gas, these lifecycle energy uses and emissions come from extraction machinery and fuel transport. Significantly, they also come from methane leaks at pipelines, well heads or coal mines. These lifecycle emissions continue, even if coal or gas plants add CCS, which also may not capture 100% of emissions at the power plant.

What’s more, the indirect energy uses and emissions of each technology will shift over time, due to changing fuel sources, advances in manufacturing and the evolution of global electricity supplies.

The new research, from lead author Michaja Pehl and colleagues, comprehensively measures the lifecycle energy use and greenhouse gas emissions of different sources of electricity, between now and 2050. It then compares these hidden footprints in a world that cuts emissions in line with a 2C climate goal and a world that stops further climate action.

Embodied energy
The first stage of the work is to add up the energy needed to build power stations and to provide them with the fuel and other inputs they need to run. This is called “embodied energy use”. It is the inverse of “energy return on investment” (EROI).

The study finds that electricity from fossil fuels, hydro and bioenergy has “significantly higher” embodied energy, compared to nuclear, wind and solar power.

For example, the study finds that 11% of the energy generated by a coal-fired power station is offset by energy needed to build the plant and supply the fuel, as the chart below shows. This is equivalent to saying that one unit of energy invested in coal power yields nine units of electricity.

Nuclear power is twice as good as coal, with the energy embedded in the power plant and fuel offsetting 5% of its output, equivalent to an EROI of 20:1. Wind and solar perform even better, at 2% and 4% respectively, equivalent to EROIs of 44:1 and 26:1.