How safe is nuclear energy?

Nuclear is one of the safest sources of energy.

Various scientific studies find this to be true, comparing the effects of all elements of nuclear energy - mining and refining Uranium, constructing and operating power plants, and the effects of accidents including Chernobyl and Fukushima - with wind, solar, hydro, biomass, fossil fuels etc.

This is no doubt surprising to many people. We are given the impression through newspapers magazines, radio and TV, and social media that nuclear energy is dangerous, because of Fukushima, Chernobyl and Three Mile Island. These are often described as "disasters" or "catastrophes", implying or sometimes claiming that thousands were killed and vast areas left uninhabitable, probably glowing at night with eerie and deadly radiation.

Chernobyl did kill people: 46 confirmed deaths, mostly from radiation sickness and thyroid cancer[1], maybe 4000 or so more[2], decades later, from cancers — if our more pessimistic assumptions about low level radiation are correct (which they may not be). And the evacuated zone, now largely free of human activity, is a teeming wildlife paradise[3].

But the Chernobyl accident involved a design of reactor which would never have been allowed to be built outside the former Soviet Union, built and operated in a culture which prevented learning from mistakes[4], and the accident occurred when most of its safety systems had been deliberately disabled in order to run an experiment on the reactor, which was being operated by a night shift crew who didn't properly understand what they were doing.

For comparison, during the same period that we've had nuclear power, aeroplane crashes have claimed tens of thousands of lives[5], but we don't have activists and politicians calling for air travel to be shut down, or aeroplanes to be replaced by airships. Nor are there calls for cars to be replaced by horses and carts, despite the carnage on our roads. 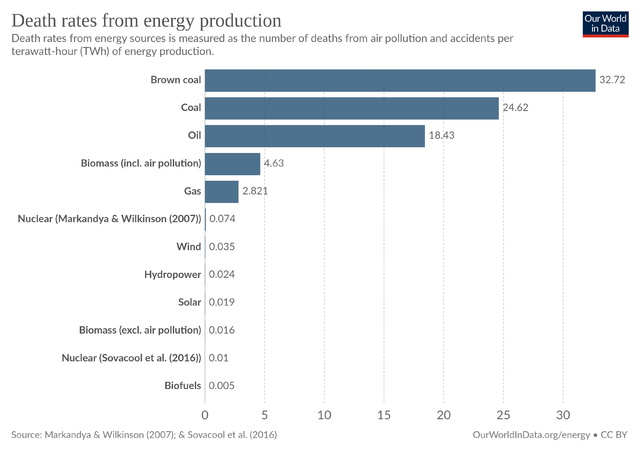 People are killed by accidents working on wind turbines and solar panels. The world's single worst disaster at a power generation plant claimed 171,000 lives and made 12 million homeless: it involved a renewable energy generator[6].

But whilst wind, solar, nuclear and hydro can be dangerous when they go wrong, fossil fuels and some renewables kill people when they go right. Quite apart from climate change, the air pollution from burning coal, oil, gas and biomass (officially classified as renewable) causes sickness and death. If we add up all the deaths from accidents (large and small) and from air pollution, we can compare different energy sources[7]:

We can work out how many premature deaths due to air pollution were prevented by using nuclear instead of coal. Climate scientist and activist James Hansen and his colleage Pushker Kharecha did this in 2013 and calculated that world-wide, between 1971 and 2009, almost 5,000 people were killed by nuclear power, but more than 1.8 million people would have been killed by the coal-burning that nuclear replaced[8]. By the late noughties almost 80,000 lives a year were being saved, so by now well over 2 million people have been saved from early deaths thanks to nuclear energy. 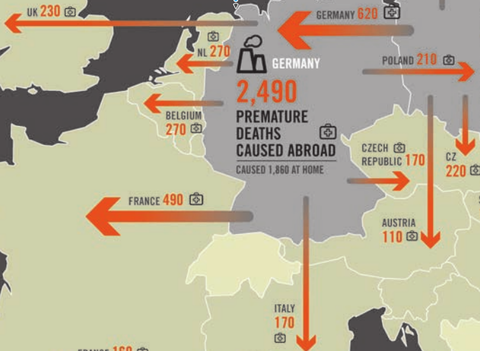 Germany's coal burning kills 4,350 people every year in Europe - 230 of those in the UK[10][11]. At least one-third of those - 1,450 lives - are due to Germany's nuclear shut-down. (Probably more, since if Germany had not shut down nuclear power stations it could preferentially have shut down Lignite ones rather than those burning the slightly less polluting black coal.) In the UK that's about 80 citizens being killed every year by Germany's anti-nuclear policy.