From ScienceForSustainability
(Redirected from Proliferation)
Jump to navigation Jump to search

Some opponents of nuclear energy cite concerns that civil nuclear power programmes facilitate development - proliferation - of nuclear weapons by states that do not currently possess such weapons. 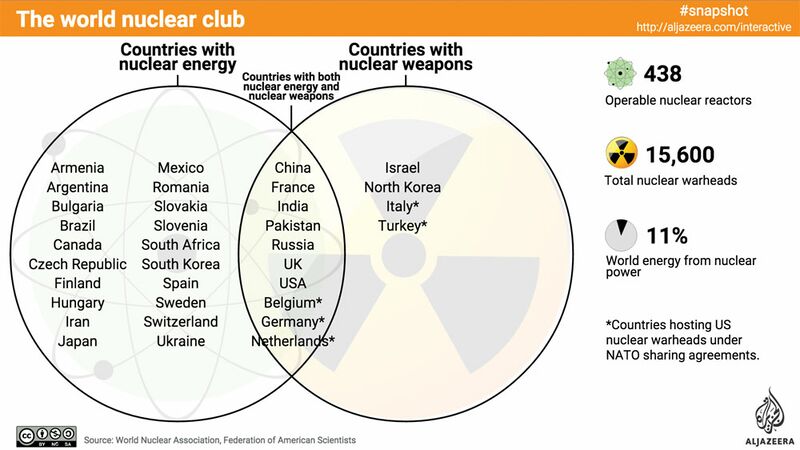 Historically the states which first developed nuclear weapons - the USA, USSR, Britain, France and China - all did so before developing civil nuclear power plants. These states, sometimes referred to as the nuclear "club", are permitted to keep their weapons under the 1970 United Nations Non-Proliferation Treaty, whilst other states which have signed up to the NPT agree not to develop nuclear weapons. India, Pakistan, Israel and North Korea have developed nuclear weapons and have not signed the NPT. South Africa under the apartheid regime had nuclear weapons (developed in collaboration with Israel) but has relinquished them. A dozen or more states had weapons programmes but have since abandoned them (voluntarily or forcibly).

Under the NPT any country wanting to employ civil nuclear power - including research reactors - has to allow inspections of its reactors and storage sites for nuclear materials by the International Atomic Energy Agency, and this protocol has resulted in the detection of attempts to develop weapons programmes such as in Iran and North Korea.

Highly explosive nuclear weapons (as opposed to "dirty bombs") require either highly enriched Uranium or Plutonium, and acquisition of either material is the major challenge in building such weapons. Enriching Uranium requires, in practice, large arrays of centrifuges: this was the technology employed by Iran in its abortive attempt to develop its own bomb. Suitable Plutonium can be produced in Uranium-fuelled reactors by removing the fuel after a short period - a few weeks or months, rather than years - and processing it to extract the Plutonium. Most commercial power reactors run under high pressures and the reactor has to be shut down and depressurised. Unusually frequent stopping and starting of such reactors is obvious to international observers. Plutonium for military purposes is more conveniently produced in reactors where fuel rods can be removed and replaced during routine operation, such as the UK's original Magnox and the USSR's RBMK reactors, and North Korea's "Experimental Power Reactor".

nuclear energy programs do provide an increased technical ability to develop nuclear weapons. However, countries with nuclear energy programs face political obstacles that help counter this proliferation risk, including improved intelligence by outside actors, and the prospect of costly nonproliferation sanctions, which jeopardize the international trade and supplies required for most energy programs to operate. When a country announces plans to develop nuclear energy, this provides an open signal for foreign intelligence agencies to pay closer attention. As nuclear energy programs become operational, the procurement of technology and materials from foreign firms provide these same agencies with opportunities for surveillance, increasing the likelihood that suspicious activities are detected in a timely fashion. Furthermore, given that the nuclear power plant industry relies on a small number of global suppliers, nearly all of whom require International Atomic Energy Agency safeguards and the peaceful use of exported materials, countries with energy programs are generally wary of risking disruptions in supply by seeking to develop nuclear weapons.

So called "dirty bombs" comprise conventional explosives mixed with radioactive material. No device of this sort has been used to date. The effect of such a device would be primarily to cause fear and disruption from its radiation source, rather than actual harm since any practical amount of radioactive material would be dispersed too diffusely to cause widespread severe effects.[3][4]

Reactor-Grade Plutonium Can be Used to Make Powerful and Reliable Nuclear Weapons: Separated plutonium in the fuel cycle must be protected as if it were nuclear weapons Richard L. Garwin, Senior Fellow for Science and Technology; Council on Foreign Relations, New York; 26 Aug 1998

Discussion of whether separated plutonium from reactors could be used to make weapons.

(WBIR) Less than a week after the terrorist attacks in Brussels, authorities are investigating whether the suicide bombers were involved in the secret videotaping of a Belgian nuclear scientist. Investigators found a camera with hours of footage while searching the apartment of a suspect in the Paris terror attacks last fall. “Those terrorists had an intention of apparently either sabotaging a nuclear plant or acquiring nuclear material," Dean Rice, Global Fellow for UT's Institute for Nuclear Security, said. "The only reason they would acquire nuclear material would be to use it as a terror device as a dirty bomb.” A dirty bomb isn't a weapon meant to kill masses of people like a nuclear bomb would. “It’s an area denial and economic impact weapon," Howard Hall, UT Governor’s chair for nuclear security, said. “What it does is it terrifies the public. There’s a great deal of fear in our culture over radiation, and so, that fear is what radiological dispersal device, or the dirty bomb as they’re called, play on.”

Many observes believe that the most profound problem with using nuclear energy for electricity generation is the connection between nuclear power and nuclear weapons. In this view, the threat of nuclear weapons proliferation increases if the world relies on nuclear power, because nuclear power capabilities could be translated into nuclear weapons capabilities. The relative merits of renewable energy and nuclear fission energy (omitting fusion as still speculative) as eventual substitutes for fossil fuels are highly controversial, with unresolved arguments over relative economic costs, environmental impacts, practicality, and safety. However, the weapons connection is unique to nuclear fission energy and constitutes, for some people, a reason to limit or abandon it.

From David Bodansky’s Nuclear Energy (second edition), the beginning of two chapters examining these links. I will be summarizing these chapters over a number of posts, and providing some background. Obviously, you would get more detail reading the book!

One kiloton was originally defined as the explosive equivalent of 1000 tons of TNT. This definition was found to be imprecise and so the term was redefined to be the release of 10^12 calories of explosive energy. The largest weapon ever tested was a 50 megaton (Mt) (1 megaton = 1000 kilotons) weapon that the Soviets exploded 3.5 kilometers above Novaya Zemlya on October 30, 1961. For comparison, the total tonnage of bombs dropped during World War II was approximately two Mt, and during the Vietnam War it was approximately 6.3 Mt.

Civilian reactors can be used for research, produce electricity (power reactors), or power submarines. Research reactors are used to test or analyze materials, produce radioisotopes for medical or industrial use (some decay so rapidly that they could not be transported long distances), or for education. Early research reactors used highly enriched uranium (20% or more U-235), some of it weapons grade (90% or more U-235). (Lightly enriched uranium is less than 20% U-235, reactor grade up to 4%+ U-235.)

7 Nuclear Power and the Weapons Threat

The Iran Nuclear Deal And The Killing Of Soleimani James Conca; Forbes; 8 Jan 2020

Discussion of the Iran Nuclear Deal, consequences of the US violation of the deal and US' 2020 escalation of hostilities through assassination of Iranian military commander.