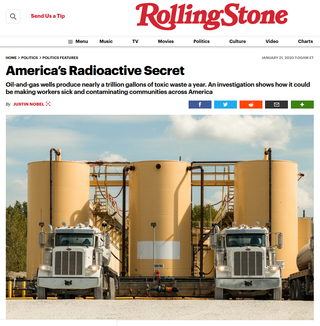 An article published in Rolling Stone[1] claims that Radium found in brine produced alongside oil and gas makes the brine "highly radioactive", and suggests that the radioactive contents are responsible for various illnesses and ailments suffered by workers and others.

This article examines the claims made in the article and attempts to assess their accuracy.

Style and structure of the article

Such narrative is interspersed with factual passages such as: "Radium, typically the most abundant radionuclide in brine, is often measured in picocuries per liter of substance and is so dangerous it’s subject to tight restrictions even at hazardous-waste sites. The most common isotopes are radium-226 and radium-228, and the Nuclear Regulatory Commission requires industrial discharges to remain below 60 for each."

There are no citations of sources of such information.

The article comprises a number of anecdotes, e.g. "a worker walked around his truck with a hand-held radiation detector ... and told him he was carrying one of the “hottest loads” he’d ever seen", but we are not given information we need to assess their relevance and impact — e.g. how "hot" the load was, and whether its level was a cause for concern. Connections are implied without assessment of whether there is possible, or even plausible, causality e.g. "a six-month-pregnant Mississippi woman was sitting on the edge of her bathtub and her hip cracked in half. Tests showed the soil in her vegetable garden had become contaminated with radium from oil-field pipes her husband had cleaned in their yard". We are not told if the tests were carried out in response to her hip fracture, and if so, who ordered the tests and why.

An exciting, possibly dangerous world of conspiracy and resistance is implied e.g. "[t]hrough a grassroots network of Ohio activists, Peter was able to transfer 11 samples of brine to the Center for Environmental Research and Education at Duquesne University, which had them tested in a lab at the University of Pittsburgh. The results were striking.", and "“They know,” Smith says. “All of the big majors have done tests to determine exactly what risks workers are exposed to.”". (A critical reader might ask whether the grassroots network of Ohio activists was the local chapter of Greenpeace or Friends of the Earth, and either Peter or one of the activists simply took Peter's brine samples to the university. The critical reader might also be more concerned if the big majors had not done tests to determine exactly what risks workers are exposed to, and ask if there is evidence that employers are knowingly exposing workers to danger, and if so, why Rolling Stone is not presenting this evidence explicitly rather than making deniable implications.)

Media Bias / Fact Check rates Rolling Stone as "Left Biased based on strongly left leaning editorial positions and High for factual reporting due to proper sourcing of information and a clean fact check record" and that it has "produced long form well researched journalism on a wide variety of topics, especially as it relates to politics", but does not include it in its list of Pro-Science sources. (Ad Fontes Media Bias chart and AllSides don't have ratings for Rolling Stone.)

The author of the piece is Justin Nobel. According to Nobel's resume he studied for an M.S. in Journalism & M.A. in Earth & Environmental Science, with courses in alternative energy, biodiversity, disease ecology, and journalism, and a B.S. in Earth & Ocean Sciences with courses in marine biology, oceanography, atmospheric science, climatology, and geology.

Nobel has written several other features and articles criticising fracking, and Rolling Stone itself carries many anti-fracking pieces.

Nobel's science education does not appear to include any aspects of the health effects of nuclear radiation radiobiology and for his article he has consulted Ian Fairlie.

This is problematic: Fairlie's assessments of many aspects of radiation and nuclear energy seem to be far removed from the scientific mainstream, for example Fairlie's articles for The Ecologist include claims for casualties of Chernobyl and Fukushima which are orders of magnitude greater than those of the United Nations Scientific Committee on the Effects of Atomic Radiation which has studied these accidents in depth.

The narrative of the article suggests that the industry is downplaying dangerous levels of radioactivity, e.g. in the 5th paragraph:

Many industry representatives like to say the radioactivity in brine is so insignificant as to be on par with what would be found in a banana or a granite countertop, so when Peter demanded his supervisor tell him what he was being exposed to, his concerns were brushed off; the liquid in his truck was no more radioactive than “any room of your home,” he was told. But Peter wasn’t so sure.

The article goes on to tell us that some brine samples Peter collected "registered combined radium levels above 3,500, and one was more than 8,500" (picocuries per litre).

How dangerous is this level? 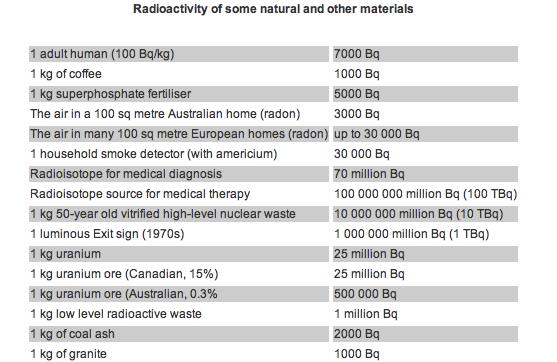 The article tells us that:

Radium in [Marcellus shale] brine can average around 9,300 picocuries per liter, but has been recorded as high as 28,500. “If I had a beaker of that on my desk and accidentally dropped it on the floor, they would shut the place down,” says Yuri Gorby, a microbiologist who spent 15 years studying radioactivity with the Department of Energy. “And if I dumped it down the sink, I could go to jail.”

This chart (right)[4] suggests that this level of radioactivity is comparable to that of coffee, and several orders of magnitude lower than would be classified as even low-level radioactive waste.

The article cites various illnesses and ailments suffered by workers and others:

Are these consistent with the claimed cause of radiation?

According to Medline Plus symptoms of acute radiation sickness (exposure to a single, very large dose of ionizing radiation) may include:

Chronic exposure – a series of small exposures spread over time – is usually associated with delayed medical problems such as cancer and premature aging, which may happen over a long period of time.

How do these compare with the reported symptoms?

"A litany of lethal cancers" is suffered by all populations of societies with decent life expectancy: are the rates of cancers in those exposed to fracking brine significantly higher than in the general population? No figures, let alone statistical analysis, are given. There are many other causes of cancers, for example being severely obese (BMI>40) potentially results in between 4 and 10 years of life lost compared with between 1.3 and 5.2 years of life lost for atomic bomb survivors who were within 1500 metres of the hypocentre and received whole body doses[5] so to determine whether exposure to radioactivity from fracking brine is causing cancers in truck drivers and others one would need to compare those exposed with a control group matched for environmental and lifestyle factors (similar diets, weights, occupations, active and passive smoking histories, stress, etc) but who were not exposed to the potential hazard.

"Sores and skin lesions that take months to heal" and nausea are consistent with radiation exposure, amongst many other possible causes.

Symptoms of "joint pain "like fire"" and "pain in bones "so bad I can’t move”, “like someone taking a drill bit and drilling into your bone without anesthetic”" seem more consistent with the pain of arthritis.

The pregnant woman whose hip cracked in half would seem to be a case of hip fracture in a patient affected by transient osteoporosis of the femoral head during the last trimester of pregnancy.

There seems no evidence that the "sheep birthing babies with the heads fused together", the "two cats, six chickens, and a rooster dropping dead", or the trees dying are in any way connected with radiation. In particular it takes huge levels of radiation, such as released by the Chernobyl disaster, to kill trees and animals. Even in the highly radioactive Red Forest trees and animals have thrived since the accident.

No evidence is given that "regular headaches", "numbness in fingertips and face", "burning rashes and odd swelling across the body", "excruciating eye, nose, and lung burning", "swelling of the tongue" to the point [that] teeth left indentations"" or "profound overgrowth of polyps in sinuses preventing nose breathing" are connected with radiation exposure.

The premise of the article is that

The first premise does not seem to have been established: the article itself states that "the extent of any health impacts are unknown, mostly because there hasn’t been enough testing" and the article's sub-heading only suggests that "it could be making workers sick"

The second is not supported by the disparity between the health effects claimed and the cause proposed for them. It is also put into question by the article telling us that fracking brine contains "not just radium, but cadmium, benzene, and arsenic, all known human carcinogens, along with lead, which can cause kidney and brain damage". Why are these not considered as possible causes of the claimed problems?

There is much more in the article than has been discussed here, such as the issue of build-up of brine deposits inside pipes and tanks which may lead to higher concentrations of radioactivity which could be more likely to cause harms, and practices within the industry such as whether the contents and possible hazards of brine tankers are properly disclosed to drivers and authorities.

However there are serious concerns with the article:

In general Nobel, and Rolling Stone, seem to be trying to imply a serious problem without stating a claim explicitly. The wording "could be making workers sick" in the sub-heading suggests that they are not confident of their case. The article does raise some reasonable concerns, but is possibly the victim of its need, as a popular publication with a left-wing bias, to engage readers with a compelling narrative of oppressed workers versus ruthless Big Business, rather than a less exciting but more scientifically accurate account of the issues.

This is not to suggest that there are no issues with industry practices regarding fracking brine. There may well be. There may be a case for a proper scientific investigation. But the article does not itself comprise such an investigation.

Science for Sustainability is indebted to Professor Geraldine Thomas of Imperial College for reviewing and suggesting improvements to this article. Errors and omissions etc remain the responsibility of SfS