Ammonia is a compound of Nitrogen and Hydrogen: NH
3. It has various industrial uses, and is particularly important for producing nitrogen fertilisers. It can also be used as a combustion fuel, in a fuel cell to generate electricity, or stored until needed and then converted to hydrogen, which is difficult to store in bulk. 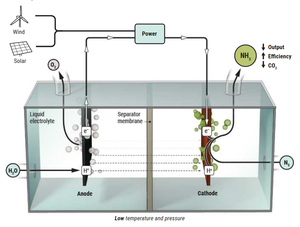 It is generally produced using the Haber (also known as Haber-Bosch) process, from nitrogen and hydrogen, which is itself usually produced from methane (natural gas) by the process of Steam Methane Reformation, which releases carbon dioxide (CO
2). Efforts are underway to develop methods of producing ammonia without CO
2 emissions. Approaches include using Carbon Capture and Storage to prevent emission of CO
2 from the SMR process, generating hydrogen cleanly from renewable or nuclear electricity by electrolysis, or generating ammonia from water, nitrogen and electricity in reverse fuel cells.

An article Ammonia—a renewable fuel made from sun, air, and water—could power the globe without carbon by Robert F. Service in AAAS Science (12 Jul 2018) discusses processes for making ammonia including reverse fuel cells, and the potential uses for ammonia not only as fertiliser but as an energy carrier fuel.

Carbon Pricing and the Economics of Green Ammonia By Stephen H. Crolius in Ammonia Energy on January 6, 2017 [article]

Discusses whether green ammonia can compete with natural gas without carbon pricing.

A policy briefing - Ammonia: zero-carbon fertiliser, fuel and energy store by the Royal Society on 19 Feb 2020 [article] - discusses such uses.

This policy briefing considers the opportunities and challenges associated with the manufacture and future use of zero-carbon or green ammonia.

What is green ammonia?

Ammonia is a pungent gas that is widely used to make agricultural fertilisers. Green ammonia production is where the process of making ammonia is 100% renewable and carbon-free.

One way of making green ammonia is by using hydrogen from water electrolysis and nitrogen separated from the air. These are then fed into the Haber process (also known as Haber-Bosch), all powered by sustainable electricity. In the Haber process, hydrogen and nitrogen are reacted together at high temperatures and pressures to produce ammonia, NH3.

However, the process of making ammonia is currently not a “green” process. It is most commonly made from methane, water and air, using steam methane reforming (SMR) (to produce the hydrogen) and the Haber process. Approximately 90% of the carbon dioxide produced is from the SMR process. This process consumes a lot of energy and produces around 1.8% of global carbon dioxide emissions.

Reducing the amount of carbon dioxide produced during the ammonia manufacturing process is critical to achieve net-zero targets by 2050. The best way to reduce carbon emissions when making ammonia is to use low-carbon hydrogen.

The most likely short-term options for creating carbon-free hydrogen at scale are blue hydrogen and green hydrogen:

Blue hydrogen is where carbon emissions from the steam methane reforming (SMR) process are captured and stored (CCS). Green hydrogen is produced using water electrolysis to generate hydrogen and oxygen, using sustainable electricity in the process.

Read more about how low-carbon hydrogen is produced at scale (PDF).

What’s the future for green ammonia?

The production of green ammonia could offer further options in the transition to net-zero carbon dioxide emissions. These include:

Two new pilot projects for producing “green ammonia” from renewable electricity are now up and running and successfully producing ammonia.

In April 2018, the Ammonia Manufacturing Pilot Plant for Renewable Energy started up at the Fukushima Renewable Energy Institute – AIST (FREA) in Japan. Earlier this week, Siemens launched operations at its Green Ammonia Demonstrator, at the Rutherford Appleton Laboratory outside Oxford in the UK.

The commercial product coming out of these plants is not ammonia, however, it is knowledge.

While both the FREA and Siemens plants are of similar scale, with respective ammonia capacities of 20 and 30 kg per day, they have very different objectives. At FREA, the pilot project supports catalyst development with the goal of enabling efficient low-pressure, low-temperature ammonia synthesis. At Siemens, the pilot will provide insights into the business case for ammonia as a market-flexible energy storage vector.

Beyond electricity storage markets, however, once the renewable energy is stored in ammonia’s chemical bonds, it can be delivered to a range of markets. According to another of Wilkinson’s slides it is “a carbon-free flexible asset,” with potential to provide grid services like demand-side response (DSR) and long-term energy storage, but the flexibility to be sold into more conventional markets like nitrogen fertilizer, chemical feedstock, and, soon, carbon-free fuel.

As well as the synthesis system, the Siemens demonstrator includes not only storage assets but also combustion assets: an internal combustion engine adapted to generate electricity using ammonia as a fuel. As Wilkinson explained to me in May, “It’s proof of principle, with the intention of demonstrating the full round trip of renewable power to ammonia and back to electricity.”

While some of the other parts of the SIP project have changed since then, the ammonia pilot plant has quietly forged forwards. The pilot plant was built by JGC Corporation and its subsidiary JGC Catalysts and Chemicals, and is operating “to evaluate the performance of the developed catalysts and acquire the engineering data for scaling up in the future.”

The low-pressure and low-temperature conditions for the ammonia synthesis catalyst supports the efficient integration of electrolyzers into the process flow, allowing ammonia production to use hydrogen from electrolyzers running on renewable energy.

Both of these pilot plants will be featured in the 15th Annual NH3 Fuel Conference, in Pittsburgh, PA, on October 31, 2018, including initial results from operations. This year’s event will again be held as a Topical Conference as part of the broader AIChE Annual Meeting. The full conference schedule will be announced in July.

Yara: solar ammonia pilot plant, for start-up in 2019 by Trevor Brown in Ammonia Industry on 21 Sep 2017

Yara, the world’s biggest producer of ammonia, has announced that it intends to build a demonstration plant to produce ammonia using solar power, near its existing world-scale plant in the Pilbara, in Western Australia.

This week, Yara announced major progress toward producing “green ammonia” at its plant in Pilbara, Australia. Its new partner in this project is ENGIE, the global energy and services group, which last year made a major commitment to developing large-scale renewable hydrogen projects.

The US ARPA-e is sponsoring several projects mostly related to ammonia generation and use.