Cleve Hill solar park is a proposed solar park on the Graveney marshes on the North Kent coast. The park would have a nameplate capacity of about 350 MW,[1] possibly coupled with a battery storage system of unspecified size.

Developers' visualisation of solar park in summer of year 10

The developers plan to mount solar PV panels facing East and West, which will result in panels being packed more closely than for the more usual South-facing orientation. The panels will be raised up to 4 metres above ground level to protect them from flooding. 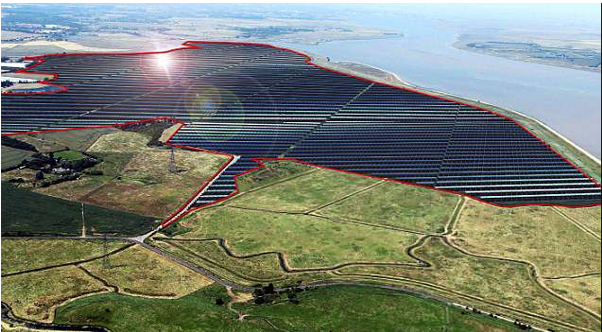 The site has formerly been used as farmland. According to Kent Wildlife Trust the site covers 360 hectares (890 acres) and "is ‘functionally linked’ to the surrounding habitats, and plays a vital role in supporting the species for which the area has been designated. In particular, significant numbers of Brent geese, lapwing and golden plover use the farmland. Marsh harrier breed and feed in the area, and may be displaced by the presence of the solar panels".

When Graveney Marshes was drained to create the arable land we see there now, a gap in the ecological network was created, and this farmland is one of the only undesignated coastal areas between Whitstable and the Medway Towns. The development site provides the biggest and best opportunity to undo some of the damage done over the past decades, by returning the land to the grazing marsh, saltmarsh and mudflat we have lost...

The developers claim that

There are minimal, if any, hazards associated with solar parks. Solar photovoltaic panels do not pose a risk of explosion, chemical leaks or toxic fumes, unlike other sources of energy generation.

Yes. We have been working closely with an industry leading battery supplier for the project’s energy storage proposals and we have provided reassurances on safety standards in response to a desire for further clarity.

In conjunction with these experts we have produced an Outline Battery Safety Management Plan which has been consulted on and agreed with the Health and Safety Executive and Kent Fire and Rescue Service. This is secured as a requirement in the draft DCO.

More favourable land management practices across solar farms are resulting in greater plant diversity on solar farms. Greater botanical diversity leads to an overall increase in species diversity including butterflies and bumblebees.8 The presence of these species is particularly important for birds of conservation concern.