It should not need saying that we are in a Climate Emergency. Its consequences will be – and already are – suffering and death.

We – practically anyone reading this on a computer connected to the internet – are, globally, the elite: the billion richest people who use half the world's energy, and produce half the world's greenhouse gas emissions. 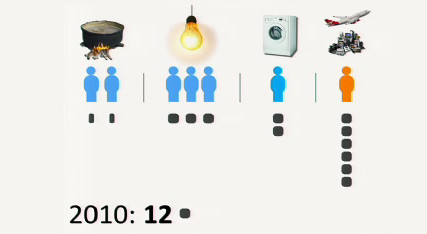 The remaining six billion of our planetary fellow-citizens – the global poor – enjoy the least energy, have contributed the least to climate breakdown, but suffer most from it.

Ethically, in terms of climate justice, we privileged first-worlders should do everything possible to mitigate climate change as effectively as possible.

(This is also enlightened self-interest: we are not immune to the effects of climate breakdown; we will just be later to suffer.)

Analyses, meta-analyses, and assessments, including those performed by the Intergovernmental Panel on Climate Change (IPCC), the National Oceanic and Atmospheric Administration (NOAA), the National Renewable Energy Laboratory (NREL), and the International Energy Agency (IEA), have concluded that deployment of a diverse portfolio of clean energy technologies makes a transition to a low-carbon-emission energy system both more feasible and less costly than other pathways[1].

It is hard to estimate how many people will die from climate change: the unknown effects of various tipping points mean that if our mitigation efforts are not effective enough then climate change could cause humanity – all 7 billion of us – to become practically extinct. Lower estimates are in the tens or hundreds of millions. Even if the omission of clean energy options – renewables, nuclear, or CCS – didn't reduce the effectiveness of our mitigation efforts very much, and didn't result in pushing us over any tipping points we could otherwise have avoided, it could still result in millions of extra deaths, and suffering for many times more.

There are people, and groups – including most national Green Parties, Friends of the Earth, and the well-heeled, influential, multinational, Greenpeace – who actively oppose nuclear energy and, to some extent, CCS[2].

We have a situation in which wealthy global-elite citizens, who are relatively safe from the worst effects of climate change, are prepared to condemn millions of the global poor to suffering and death because of ideological objections to mitigation technologies which experts agree to be necessary.

It is particularly obscene that countries such as Germany, which enjoy prosperous, energy-rich standards of living, are actually shutting down existing nuclear power stations and replacing them with fossil fuels, which will cause more suffering and death from climate change in the global South.

If nuclear were particularly dangerous – say, as dangerous as air travel, which which kills hundreds or thousands of people a year[3], – then there might be some cynical justification for selfishly shifting the risk from German citizens to less fortunate, less wealthy and less powerful people in remoter parts of the world.

But Germany's action is also self-destructive: nuclear is one of the safest energy sources (for example, of all the major nuclear accidents in the world only one was fatal, and killed around 200 people) and the coal Germany is burning to make up for the loss of the reactors it has closed is killing more of its own – and its neighbours' – citizens through air pollution alone[4], than the entire nuclear power industry has ever done.

Germany is not alone: many other countries are closing nuclear power plants[5], but in the light of Germany's claim to global leadership in environmental and climate mitigation matters[6] and Angela Merkel's identification as the "Climate Chancellor"[7]the country could fairly be described as a leader in climate hypocrisy.