Extinction Rebellion (XR) is a movement dedicated to pressing governments to take effective action on climate change, biodiversity loss and other boundaries of human existence on Earth. According to XR co-founder Roger Hallam[1] a key part of their strategy is to mobilise a significant proportion - around 3.5% - of the population in Non-Violent Civil Disobedience disrupting capital cities, based on the work of Erica Chenoweth and others.[2] 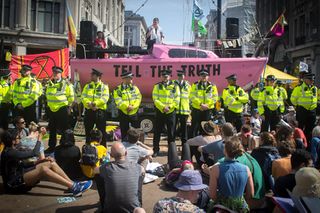 XR in the US also has a fourth demand, regarding global justice. In the UK there have been discussions on whether to adopt such a demand, with some opposing it because they think it would make XR look more politically left-wing and jeopardise support from political conservatives.

XR also has a set of principles, including avoiding blaming and shaming, and non-violence.

The first demand - to Tell The Truth - is sometimes referenced within XR as a moral obligation for activists to discover and own their own truths, for example to acknowledge various forms of (especially middle-class and white) privilege, and the impact of one's personal lifestyle choices on our fellow-global-citizens.

The second - to halt biodiversity loss and reduce greenhouse gas emissions to net zero by 2025 - has been the subject of some scepticism. There doesn't seem to be any support for it as a realistic target amongst energy and economics experts, and at XR presentations it has sometimes been justified as a negotiating position rather than a realistic target, although it has also been presented as an ambition which might be achieved through a mobilisation of effort comparable to that of World War II.

The third demand - "Beyond Politics" and the demand for Citizens' Assemblies - is based on the observation that existing governmental systems around the world have failed to produce effective action on climate change and other boundary problems. The idea of a CA is that it should be able to take a position independent of the current government and the exigencies of party politics, and mandate action commensurate with the urgency and magnitude of the problems.

In keeping with their demand for Citizens' Assemblies to decide on solutions to environmental problems, and unlike most environmentalist organisations such as Greenpeace, FoE and Green Parties, XR declares that it "does not take a position on solutions to the ecological crisis - our third demand is for a Citizens Assembly to come up with a way to deal with the crisis focussing on climate and ecological justice based on being presented with facts from a variety of experts"[3]. However high-profile XR spokespeople such as Gail Bradbrook and Rupert Read have publicly expressed anti-nuclear opinions[4] and Read also opposes genetic engineering[5].

Amongst XR's principles is no blaming or shaming of individuals. This includes not blaming or shaming people for their use of, for example, cars or aeroplanes, for eating meat or dairy, living in homes with heating and hot water, having children, etc. XR asserts that it is practically impossible to live without having some environmentally damaging impact and that we need changes at state and world level to make it possible for everyone to live sustainably.

Wikipedia's article on Extinction Rebellion gives an account of XR's origins and actions.

Extinction Rebellion's own website at rebellion.earth has much about the movement, including FAQs.

A well-informed discussion of the history, organisation, and rationale of Extinction Rebellion can be found in an interview with XR spokesperson Zion Lights in the New Left Review.

An example of XR's introductory "Heading for extinction - and what to do about it" this video of the talk and Q&A in Oxford in March 2019 (with George Monbiot, who was arrested in XR's October 2019 action).

Roger Hallam and Rupert Read discuss their differences over airport actions, the use of drones, the role of arrests and approaches to the media in a public meeting in Oxford in September 2019, shortly before Hallam got pre-emptively arrested and jailed for his part in the XR-breakaway "Heathrow Pause" drones action.

Some public attacks on XR were countered by Jonathan Pie in April and October, and by The Mash Report.

In a pamphlet "Truth and its consequences: a memo to fellow rebels on smart strategy, and on soul" published in July 2019, XR spokesperson Rupert Read wrote:

IN LIEU OF A SUMMARY:

This pamphlet is an exercise in true-story-telling. It begins by underscoring the paramount importance of XR’s Demand 1: for telling the truth underscores everything else. And telling the truth begins at home: we must tell the truth about how dire things are, hard though it is. Only if we do so might we motivate enough widespread buy-in to the truly radical changes that will be needed to prevent (or at least ameliorate) collapse. With truthforce, anything is possible. Without it, game-over.

My pamphlet aims to tell this hard truth; and others:

I argue that in order to make the hard truth about how bad things are and how much and fast everything has to change palatable, we need to ensure that the citizenry understand that the privileged are not going to get away with not transforming along with the rest of us, and in fact that they are going to have to change more, give up more. Only such a promise of a relatively equal handling of the pain to come, as in World War II, will be acceptable. I therefore argue that our Rebellion — as well as aiming at the commonplace, as our taking of the bridges last year and especially our taking of public space in April did — must sometimes aim squarely at the elite, at the 1%.

Furthermore, I explain why, as we move further and further into the unknown of how successful XR could become, historical precedents become less and less relevant. In particular, the so-called 3.5% ‘rule’ is increasingly of questionable relevance to us; to actually effect the kind of vast swift system-change now needed to head off collapse, we will need to take a pretty large swathe of the 99% with us.

I draw from this some practical conclusions for this Autumn’s return to Rebellion: Principally, that in September we would be far better off targeting London City Airport, which is planning to expand much more than Heathrow, and whose short runway means that it is used by small jets taken almost exclusively by businessmen and the rich, than Heathrow. (I suggest too that relying on drones risks distracting the media and the public from the way in which our action against airport expansions is non-violent action. Even if, as is planned, we succeed in keeping our any use of drones resolutely non-violent, it is unlikely to be perceived that way.)

And that in October we should seek to shut down organs of Government and/or organs of financial capital.

What I’ve written contains great darkness and great light; it is imho not possible to offer a summary of this pamphlet, because the pamphlet aims to take the reader on a journey through those. It offers a narrative arc of thought and experience - much as our Rebellion in April did. Or much as a novel like War and Peace does.

There is no substitute for reading it. Right to the end.

In advance of the Extinction Rebellion actions in London, April 2019, Dr. Cameron Brick (Cambridge University) and Dr. Ben Kenward (Oxford Brookes University) created a survey to assess the response of the general public to the actions.

At the point at which the rebellion had not yet begun to target dedicated public transport infrastructure, it had more support than opposition from the UK public.

Findings from conversation with Erica Chenoweth on 16.4.19 Google doc