In a traditional grid comprising thermal (e.g. coal, gas and nuclear) and hydro-electric power stations the amount of power being generated is under control of the grid operators. Demands fluctuate rapidly and unpredictably as consumers turn appliances (e.g. lights, kettles, cookers etc) on and off manually, and thermostats turn appliances on and off automatically. There are bigger but more predictable fluctuations in demand e.g. in the morning when people get up and make breakfast; although one cannot predict when each and every individual kettle will be switched on and off one can be sure that X million more kettles will be turned on around 8am than around 6 or 10am. It is the job of grid operators to anticipate and provide for these fluctuations.

Thermal and hydro generators have heavy, rapidly-spinning turbines and alternators which act as flywheels storing energy: if the mechanical power driving the alternator is removed it will keep on producing some power for many seconds as it slows to a halt. The collective flywheel effect of all the spinning generators on the grid smooths out small, rapid, unpredictable fluctuations in demand. Slower but bigger fluctuations - such as millions of people turning their kettles at the end of a popular TV programme - are often best handled by increases in hydroelectric (or pumped hydro) generation, which can turn on and off in a few seconds. Longer term fluctuations - such a when people get up in the morning - are matched by varying gas or coal generation (or in France, by varying nuclear power output).

The advent of intermittent renewables such as wind and solar PV creates two challenges to grid stability:

The second problem is increasingly being addressed by grid-connected battery systems which can generate significant amounts of power for brief periods to compensate for rapid fluctuations in the balance between generation and demand; they effectively simulate the flywheel effect of spinning generators.

The first problem has consequences:

Problems 1 and 3 affect the economics and energy (and CO2) efficiency of dispatchable generators. Issue 2 has consequences for grid stability: if the rate at which intermittent generation increases or (particularly) decreases is faster than the rate at which dispatchable generation can be decreased or increased to match then over-voltage or brownouts could occur. This is a particular problem with proportions of solar PV generation in hot climates with heavy summer loads such as Southern California: in evenings the sun sets and PV output ceases simultaneously with the evening peak as people return home from work and turn on air conditioning and cooking appliances etc causing a very rapid and protracted demand for dispatchable energy. This pattern of demand is known as the "duck curve".

Pumped hydro, where feasible, or very large storage batteries can help meet the demand but generally fast-responding open-cycle gas turbines (basically jet engines driving alternators) are best suited to meet such demands, but have the disadvantage of being only about 30% efficient compared to the circa 60% efficiency of slower-responding Combined Cycle Gas Turbine generators.

The use of renewable power generation continues to grow around the globe. The challenge introduced with renewable generation is that it can be interrupted by timing and weather, and this variance affects the stability of the power produced. The sum of all generation must meet the demand at the very instant the demand is manifested-simply put, most of the electricity around the globe is produced and used in the very same moment. Without a solution for large-scale, cost-effective energy storage, the only way to fill the gaps in fluctuating generation from renewable resources is by partnering dispatchable power generation.

The California duck curve has become synonymous in the industry with the shape of renewable generation. The renewable duck generation rides on top of the rest of the generation portfolio, which is referred to as the duck pond. This paper discusses the changes in demand for this pond of dispatchable generating resources as they react to the presence and growth of the duck. 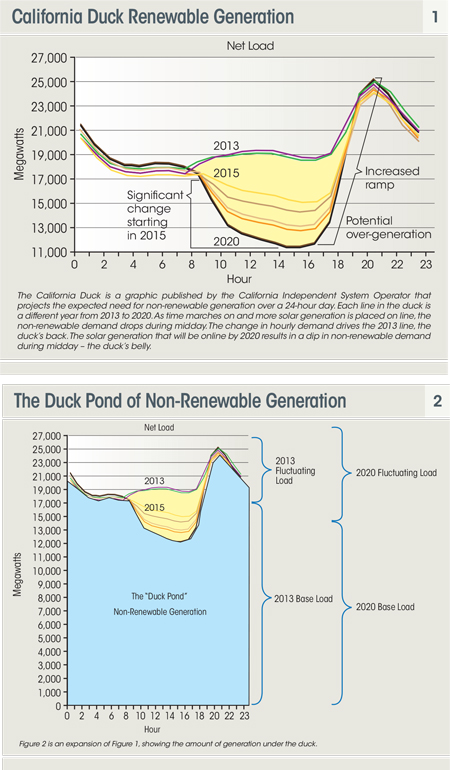 Grid stability is likely to be increasingly challenged as power distribution moves from a centralized to a more decentralized model, new research has found.

According to a paper published this week in the journal Nature Energy by researchers from Germany’s Max Planck Institute for Dynamics and Self-Organization and the UK’s Queen Mary University of London, integrating growing numbers of renewable power installations and microgrids onto the grid can result in larger-than-expected fluctuations in grid frequency.

The researchers collected data from grids of various sizes in Germany, France, the UK, Finland, Mallorca, Japan and the US. Based on this data, they developed mathematical models that “can establish the influence of making the grid smaller or of adding a bit more renewable energy” in order to aid in planning, said Professor Christian Beck of Queen Mary University, one of the paper’s co-authors.