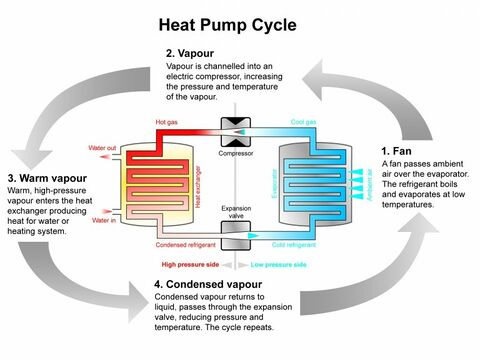 Heat pumps (see also Wikipedia) employ the same principles as are found in fridges and air conditioning, pumping heat from one part of their machinery to another to make one part colder and another hotter, but are used specifically for heating rather than for cooling. They can be much more efficient than using electricity directly for heating. Even when using electricity generated by fossil fuels the overall conversion of fossil fuel energy to useful heat can be similar to or better than using the fossil fuel directly. It is also possible to build a heat pump which runs directly from natural gas but there are very few commercially available.

The ratio of heat output from a pump to primary power (usually electricity) consumed is its Coefficient of Performance and depends on the difference between the output and input temperatures, and other factors.

For space heating applications heat pumps commonly draw their input heat either from outside air (air source) or from the ground, via pipes laid under an outdoor area or boreholes sunk outside. Where a body of either fresh or sea water is available this can be used as the heat source.

This study has drawn together a number of existing data sets and methods to produce a new model providing a strategic assessment of the suitability of England’s waterbodies for heat extraction. It has identified areas where environmental factors may potentially constrain water source heat pump installation, and the locations with the highest potential for open loop water source heat pumps.

At a strategic level this study has come to the following conclusions about the heat capacity of England’s waterbodies:

We’ve built Britain’s biggest marine source heat pump, which will heat a 300-year-old mansion at Plas Newydd on the North Wales coast. This is the first project in the pilot phase of our Renewable Energy Investment Programme. This £3.5 million pilot scheme which will help us reach our renewable energy targets.

The marine source heat pump will provide 100 per cent of the heating needed by Plas Newydd Country House and Gardens. The 18th-century mansion used to be our biggest oil user and on some winter days would consume 1,500 litres of oil a day – the same as a typical house would use in ten months.

Now Plas Newydd will be heated with a new local and clean energy system, which pumps a small amount of sea water from the Menai Strait in Anglesey, through pipes to and from a heat exchanger on the shore, and then up 30 metres of cliff face to the mansion’s boiler house. The 300kW marine source heat pump cost £600,000 to install in total and is expected to save us around £40,000 a year in operating costs. That money can be reinvested back into the conservation of this elegant mansion.

The government has promised to spend more than £20m on nine schemes across the country to exploit cheap, renewable heat from canals, old mineshafts and in London tube lines.

Birmingham’s canals have been picked to play a role in the UK’s green heating revolution by GreenSCIES, which is also working on a proposal that uses “waste heat”from the London underground to warm hundreds of homes in Islington, north London.

The consortium, led by London South Bank University, plans to use the government funding to grow the GreenSCIES project and install water source heat pumps in the canal, which runs through Sandwell near Birmingham.

The heat pumps work like a refrigerator in reverse, using a coolant gas to transfer heat from the water to be piped into a council tower block of 1,200 residents, many of whom are fuel poor. An extension of the project could be used to warm Birmingham City hospital.

Heat pumps will also be used at another government-backed project in Rugeley, north of Birmingham, where a defunct coal-fired power plant is to be turned into a sustainable village of 2,300 homes, warmed by local canals and geothermal heat from disused mineshaft.

Once at full scale, the Islington project will provide heat to an estimated 33,000 residents and nearly 70 local businesses. It will also help to reduce carbon emissions by an estimated 80% compared with traditional gas-fuelled heating systems while also addressing fuel poverty.

A modest single-storey building on the riverbank in Kingston upon Thames doesn’t look like a prototype for an innovative renewable system that, according to its engineer, could be the answer to the world’s looming energy crisis.

Its brick walls house part of a heat pump system that harvests naturally stored energy from the River Thames, and then delivers under-floor heating and hot water for 56 affordable homes, 81 private apartments and – later this year – a new 145-bedroom hotel.

‘Every process in this system has the potential – using known and proven technology – to provide a 100% renewable, zero carbon thermal energy source for the planet if powered by clean electricity,’ says White.

The open water source heat pump system at the £70m Kingston Heights development is the first of its kind in the UK, and has been a labour of love for both White and Mike Spenser-Morris, the owner of NHP Group, the developer.

It works by using pumps in the plant building to extract water through intakes positioned 2.5m below the river surface, where the water temperatureis relatively constant year-round. After a two-stage filtration process, heat is transferred from the river water to a secondary circuit that links to a plant room on the fifth floor in the apartment block. Water source heat pumps then increase the temperature of the low-grade heat before sending it to mini plant rooms, where the second part of the heat pump upgrades temperatures further. The system is capable of delivering 2.3MW of heat. (See How it works below).

The most innovative element of the scheme is the taking of such a high thermal load from an open body of water. This gives far higher load potential than a traditional open loop borehole system, where the abstraction rate on groundwater is limited to how much can be pulled physically without causing instability to aquifer temperatures.

The main purpose of this project is to develop a platform to investigate the performance of an Air to water residential CO
2 heat pump which reduces the severe environmental problems causing by synthetic refrigerants, for Space heating and domestic hot water, in an average UK domestic house with high temperature hydronic heat distributing system.

For this a numerical simulation model of Air source Transcritical CO
2 heat pump system was developed based on thermodynamic equations using Engineering Equation Solver (EES). Then factors to be considered in components selection in the construction of CO
2 heat pump cycle and numerical simulator and the modifications that improve the performance of the heat pump cycle were studied and analyzed, the values of the model parameters are estimated based on measured data for existing devices for the optimum output from the simulation system. The equations developed to estimate the performance and the behaviour of the components used in the heat pump cycle were based on the thermodynamic relations and laws. And then to validate the model, its performance was compared with Dr Jørn Stene’s CO
2 Heat Pump simulation model at similar operating and design conditions.

Finally, the simulation code for CO
2 heat pump was developed in such a way that, the performance of the heat pump can be evaluated when retro-fitted in any domestic housing by running the code with heat demand (space heating and domestic hot water demand) input. In this project heat loads for average UK domestic house and the climatic data were taken from ADEPT developed by ESRU, University of Strathclyde were chosen to find the performance of the CO
2 heat pump when retro-fitted as future research with few modifications to the heating distribution and heat generation system.