Levelised cost of energy and cost of intermittency

Different clean energy sources, particularly renewables such as wind and solar PV, and nuclear, are often compared on the basis of their "Levelised Cost of Energy" (or Levelised Cost of Electricity) - LCOE. This measure represents the cost price of the energy (usually electricity) that the plant generates, taking into account the costs of building and operating it over its lifetime. Wikipedia's article "Levelized cost of energy" describes LCOE estimation in more detail.

However levelised costs do not take account of the costs of intermittency. Wind power fluctuates with wind speed and solar with time of day, seasons and cloud cover, so conventional 'dispatchable' power plants - usually fossil fuel generators - must be used to make up the difference between demand and supply, but the cost of this plant is not included in the levelised cost of renewables. Thus even if renewable forms of energy have the same levelised cost as reliable or dispatchable ones, the value of the power they produce may be lower. In short, levelised costs are poor at comparing different forms of power generation.[1]

This paper examines five different low and no-carbon electricity technologies and presents the net benefits of each under a range of assumptions. It estimates the costs per megawatt per year for wind, solar, hydroelectric, nuclear, and gas combined cycle electricity plants. To calculate these estimates, the paper uses a methodology based on avoided emissions and avoided costs, rather than comparing the more prevalent “levelized” costs. Three key findings result:

First—assuming reductions in carbon emissions are valued at $50 per metric ton and the price of natural gas is $16 per million Btu or less—nuclear, hydro, and natural gas combined cycle have far more net benefits than either wind or solar. This is the case because solar and wind facilities suffer from a very high capacity cost per megawatt, very low capacity factors and low reliability, which result in low avoided emissions and low avoided energy cost per dollar invested.

Second, low and no-carbon energy projects are most effective in avoiding emissions if a price for carbon is levied on fossil fuel energy suppliers. In the absence of an appropriate price for carbon, new no-carbon plants will tend to displace low-carbon gas combined cycle plants rather than high-carbon coal plants and achieve only a fraction of the potential reduction in carbon emissions. The price of carbon should be high enough to make production from gas-fired plants preferable to production from coal-fired plants, both in the short term, based on relative short-term energy costs, and the longer term, based on relative energy and capacity costs combined. 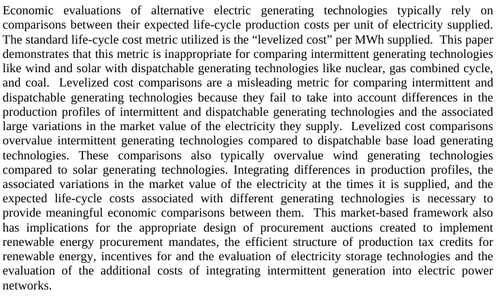 Everyone “knows” that nuclear is expensive. We also know that existing reactors produce clean electricity very cheaply. So which is it, expensive or cheap? It depends how one calculates the value.

Levelized Cost of Electricity, or LCOE, is a figure used to compare energy costs on a supposedly “levelized” way. Sounds fair, right? We calculate the LCOE for all energy sources and then build the cheapest one. Problem solved!

Alas, it is not that simple. LCOE is a black, opaque box that can give basically any answer one wants. To understand the results of any given LCOE comparison, one needs to read the fine print – what assumptions went into the calculation and why – very carefully.

The present global discussions of energy in a carbon-constrained world pit two ethical philosophies against each other – justice for the planet and justice for the poor (Wright and Conca 2007). Although the approximately 150 tkWhrs generated between 1910 and 1990 emitted over 160 billion tons of CO with significant damage to human health and the environment, it also lifted almost 2 billion humans out of abject poverty (United Nations 2009) and significantly increased life-spans for the poor and middle class. And this trend continues to accelerate.

As discussed in What Is Our Energy Future? the world needs about 30 trillion kWhrs of electricity per year to eradicate global poverty and war, twice what we produce now. But what is this going to cost society? In the longrun? What are the actual costs to produce energy - not the fixed price, not the financing, not the tax breaks and subsidies, or the mandates, not all of the artificial add-ons that we demand in order to make someone rich or to fit into our economic model. These other costs are what go into calculating levelized costs, lossely defined as a break-even point for investors, utilities and consumers. Levelized costs are critical for short-term economic planning and financing, but society needs to know the actual total life-cycle costs so we can plan beyond our captive 4-year intervals. Otherwise, short-term profits will drive us down the fossil-fuel path by default and we will have no hope of breaking this costly cycle. By life-cycle costs, I mean the total costs of building, operating, maintaining, fueling and decommissioning a thermal power plant, a solar array, a wind farm or hydroelectric dam over its life, that is, 15 years for a wind turbine, 40 years for a fossil fuel plant, 60 years for a nuclear plant, or 80 years for a large hydroelectric dam. Dividing those total costs by the amount of energy actually produced, not theoretically possible or installed capacity but actually produced, gives a lifecycle cost in ¢/kWhr. How we finance this cost is a totally different issue, one at which we generally fail as a society. To calculate these costs, each source must be normalized to the capacity factor and the life span and a specific total energy production, such as 0.5 trillion kWhrs. Although it is cheap to build a gas-fired plant, the fuel costs become more important as time goes on, even with the present gas surge. While it is expensive to build a nuclear plant, the fuel costs are low and the capacity factor high, so the longer it operates the cheaper it becomes. Similarly for wind and solar, expensive to build but no fuel means the longer they are operating the cheaper they become. On the other hand, the longer fossil fuel plants operate the more expensive they become because it is all about the fuel.