As with Carbon intensity, the safety of an energy source must include all deaths and injuries involved in the technology e.g. from mining accidents, from air pollution produced by burning fuels, etc.

Our World In Data

It goes completely against what most believe, but out of all major energy sources, nuclear is the safest by Hannah Ritchie in Our World In Data on 24 Jul 2017 [article]

The unintentional consequences of energy production can, however, also result in negative health outcomes. The production of energy can be attributed to both mortality (deaths) and morbidity (severe illness) cases as a consequence of each stage of the energy production process: this includes accidents in the mining of the raw material, the processing and production phases, and pollution-related impacts. We have recently explored this trade-off with respect to development and air pollution.

If we want to produce energy with the lowest negative health impacts, which source of energy should we choose? Here we limit our comparison to the dominant energy sources—brown coal, coal, oil, gas, biomass and nuclear energy; in 2014 these sources accounted for about 96% of global energy production.1 While the negative health impacts of modern renewable energy technologies are so far thought to be small, they have been less fully explored.2

There are two key timeframes to consider when attempting to quantify potential fatalities from energy production. The first is the short or generational timespan, which covers deaths related to accidents in the mining, processing or production phase of energy sources as well as the outdoor air pollution impacts from the production, transport and combustion of fuels. The second is the long-term or intergenerational impacts (and resultant deaths) from climate change.

What are the safest sources of energy? by Hannah Ritchie in Our World In Data on 10 Feb 2020 [article]

Compared to the earlier article this one includes data on renewable energy sources.

... energy production has downsides as well as benefits. There are three main categories:

All energy sources have negative effects. But they differ enormously in the size of those effects. That difference can be easily summed up: by all metrics, fossil fuels are the dirtiest and most dangerous, while nuclear and modern renewable energy sources are vastly safer and cleaner.

From the perspectives of both human health and climate change, it matters less whether we use nuclear power or renewable energy, and more that we change to one or both of them rather than fossil fuels. 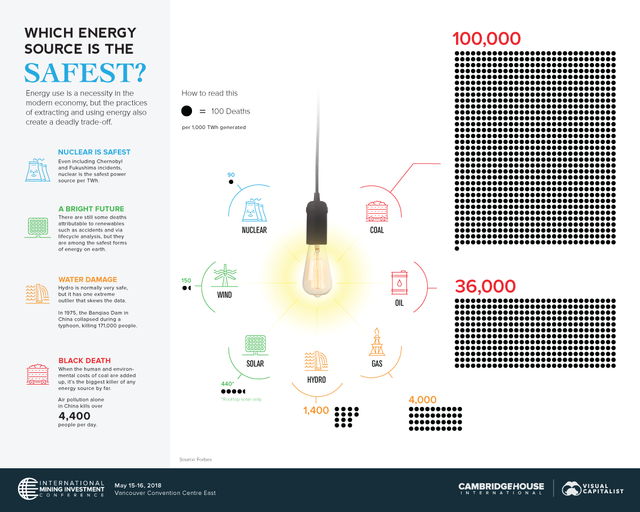 When it comes to conversations on energy, it’s hard to leave your feelings at the door.

It’s arguable that energy is the single most important driver of human progress – it’s a multi-trillion dollar industry that powers our daily lives, technological advancements, and even the economic development of entire countries. At the same time, our choices around energy can have significant consequences. How we decide to generate energy can decimate the environment, fuel political conflicts, and even cause human deaths as unwelcome side effects.

The outcomes from our choices around energy are so vivid, that we’ve developed strong and polarized associations with the subject at hand.

The Empirical Perspective Today’s visualization on the safest sources of energy comes to us from Cambridge House, the company hosting the International Mining Investment Conference 2018 on May 15-16 in Vancouver, BC, and it uses an empirical approach to compare different energy sources with one another.

Based on the data, this comparison provides a perspective that will be surprising to many viewers. Despite its perceived dangers, nuclear is actually the safest type of energy.

A 2002 review by the IAE put together existing studies to compare fatalities per unit of power produced for several leading energy sources. The agency examined the life cycle of each fuel from extraction to post-use and included deaths from accidents as well as long-term exposure to emissions or radiation. Nuclear came out best, and coal was the deadliest energy source. The explanation lies in the large number of deaths caused by pollution. “It’s the whole life cycle that leads to a trail of injuries, illness and death,” says Paul Epstein, associate director of the Center for Health and the Global Environment at Harvard Medical School. Fine particles from coal power plants kill an estimated 13,200 people each year in the US alone, according to the Boston-based Clean Air Task Force (The Toll from Coal, 2010). Additional fatalities come from mining and transporting coal, and other forms of pollution associated with coal. In contrast, the International Atomic Energy Agency and the UN estimate that the death toll from cancer following the 1986 meltdown at Chernobyl will reach around 9000.

A wind turbine caught fire Tuesday afternoon in Ooltgensplaat on Goeree-Overflakkee, costing the lives of two mechanics.Four mechanics were at work in the wind turbine on the Mariadijk, about 80 meters above ground, Tuesday afternoon. By a cause, yet unknown, a fire started in the engine room. Two mechanics managed to get themselves to safety in time, reported a police spokesperson. Rescuers found the body of a deceased mechanic next to the wind turbine on the ground.

This Photo Of Two Engineers Hugging Atop A Burning Turbine Before They Died Is Heart-Breaking! archipelagofiles

This photograph tugs at your heartstrings. Two engineers hug and cling to each other as fire and smoke creeps toward them. They both died after. According to news reports, one of them jumped off the turbine while the other succumbed to the fire. What makes this more heartbreaking is that the two engineers are just aged 19 and 21.

A solar panel installer has died after he fell through a barn roof. His employer Eco Generation Ltd has been fined £45,000 after it was found the company had failed to provide vital safety equipment. Gregorz Sobko had been working on the roof of a cowshed when one of the clear plastic panels, designed to let in light, gave way. The 34-year-old from Southport fell five metres to the concrete floor below and died in hospital ten days later.

The Banqiao Reservoir Dam is a dam on the River Ru in Zhumadian City, Henan province, China. Its failure in 1975 caused more casualties than any other dam failure in history. It was subsequently rebuilt. The Banqiao dam and Shimantan Reservoir Dam are among 62 dams in Zhumadian that failed catastrophically or were intentionally destroyed in 1975 during Typhoon Nina. These dam failures killed an estimated 171,000 people; 11 million people lost their homes. It also caused the sudden loss of 18 GW of power, the power output equivalent of roughly 9 very large modern coal-fired thermal power stations.

Sources: Yi Si, "The World's Most Catastrophic Dam Failures: The August 1975 Collapse of the Banqiao and Shimantan Dams," in Dai Qing, The River Dragon Has Come!, M.E. Sharpe, New York, 1998.

The 2009 Sayano–Shushenskaya hydroelectric power station accident occurred at 00:13 GMT on 17 August 2009, (08:13 AM local time) when turbine 2 of the Sayano–Shushenskaya hydroelectric power station near Sayanogorsk in Khakassia, Russia, broke apart violently. The turbine hall and engine room were flooded, the ceiling of the turbine hall collapsed, 9 of 10 turbines were damaged or destroyed, and 75 people were killed.

Coal pollution and its health impacts travel far beyond borders, and a full coal phase-out in the EU would bring enormous benefits for all citizens across the continent. That is according to a new report published today by the Health and Environment Alliance (HEAL), Climate Action Network (CAN) Europe, the WWF European Policy Office and Sandbag. The report, ‘Europe’s dark cloud: How coal-burning countries make their neighbours sick’, analyses the health impacts from air pollution of all EU coal-fired power stations for which data is available (257 out of 280). It reveals that in 2013 their emissions were responsible for over 22,900 premature deaths, tens of thousands of cases of ill-health from heart disease to bronchitis, and up to EUR 62.3 billion in health costs.

Germany – home to the much-hailed ‘Energiewende’ green revolution – suffered more premature deaths linked to coal plant pollution than any other EU member state, research by health and environment campaigners has found. Analysis of 257 of 280 coal-fired power plants in the EU found that their 2013 emissions caused over 22,900 deaths, tens of thousands of illnesses from heart disease to bronchitis, and up to €62.3 billion in health costs. 3,630 people in Germany died from coal-related illnesses in 2013, according to the report by the Health and Environment Alliance, Climate Action Network Europe, WWF European Policy Office and Sandbag.

A dike failure at TVA's Kingston Fossil Plant led to the largest spill in history.