Tritium is an isotope of Hydrogen with two neutrons. It is slightly radioactive with a half-life of over 12 years, emitting low-energy beta particles. Some Tritium is produced as a side effect of reactions in nuclear power plants. It combines with Oxygen to form Tritiated Water. (See Wikipedia article for more information including health risks.)

The Health Physics Society has a fact sheet on Tritium, its health risks, regulations etc.

An article on the Hiroshima Syndrome blog "Background Information on Tritium" discusses the health hazards of Tritium and includes the a chart showing levels at which biological effects occur compared to regulatory limits for Tritium in drinking water: 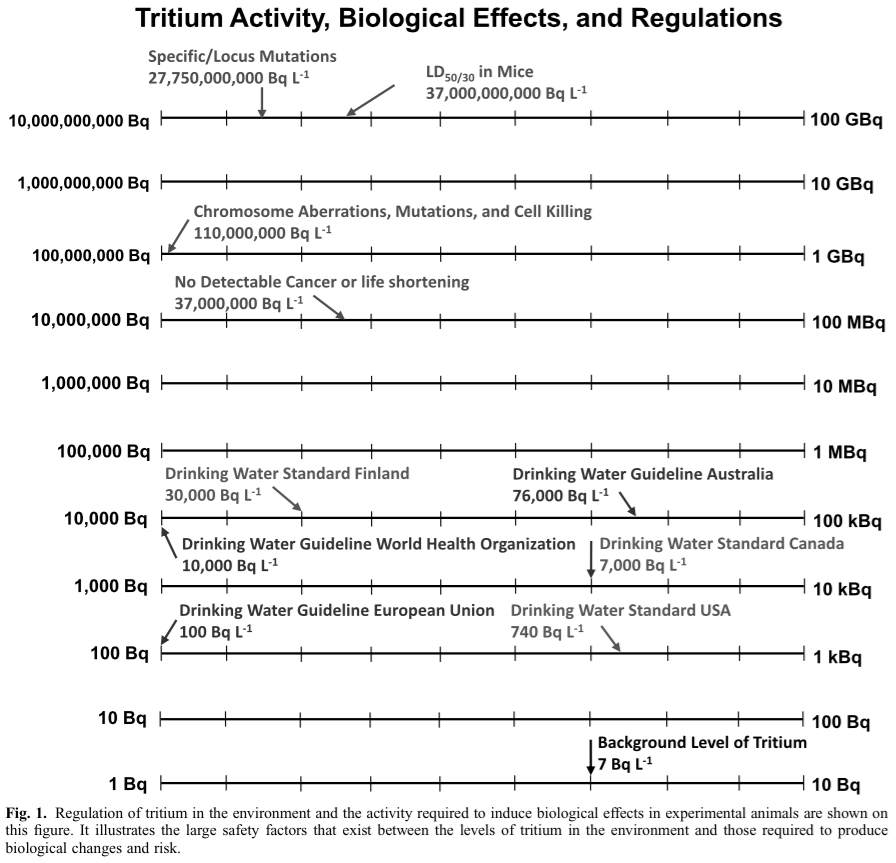 One mechanism by which Tritium can be produced is irradiation of another Hydrogen isotope, Deuterium, which also combines with Oxygen to form "heavy water". Canada uses its own "CANDU" design of nuclear power reactors which use heavy water as moderator and thus tend to produce relatively large amounts of Tritium compared to conventional "light water" reactors. Therefore Canadian nuclear safety regulations are particularly concerned with the management of Tritium. 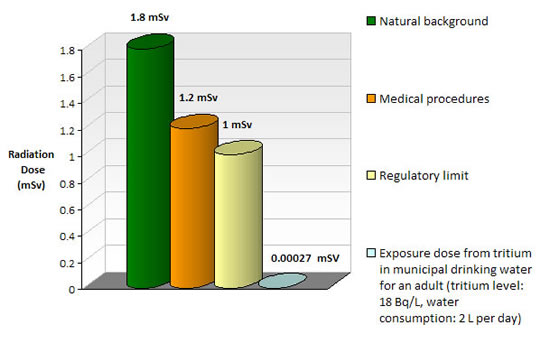 The Canadian Nuclear Safety Commission also publishes a technical paper Standards and Guidelines for Tritium in Drinking Water which also compares regulations in Canada with those in other countries.

The Canadian Nuclear Association also has a publication on Tritium Formation and health risks.

An article in Scientific American "Is Radioactive Hydrogen in Drinking Water a Cancer Threat?" (David Biello; 7 Feb 2014) discusses the US Environmental Protection Agency's plans to re-evaluate standards for tritium in water.

A paper Human Health and the Biological Effects of Tritium in Drinking Water: Prudent Policy Through Science – Addressing the ODWAC New Recommendation (Boreham et al; Dose-Response; 22 Feb 2011) discusses regulatory limits for Tritium in the context of scientific evidence on its carcinogenic effects and comparison with exposure levels from natural background radiation.