An abridged version of this article appeared in Extinction Rebellion's newspaper "The Hourglass" issue 3 / November 2019 under the title: "Staying warm in a house on fire".

Paradoxically, global heating is likely to result in colder winters in the British Isles for some decades to come, as the temperate Gulf Stream falters[1][2], and disruption to the polar vortex unleashes the Beast from the East[3]. Burning yet more fossil fuels to stay warm is the last thing we need but, even if Carbon emissions were no problem, this is particularly bad news since British housing and heating systems are built for our relatively mild winters and are no match for the temperatures our neighbours in continental Europe experience – and build for – which can drop tens of degrees below freezing[4]. On top of that, gas supplies can struggle to keep pace with peak demands[5].

We can do a little to help reduce our fuel use (and bills) by putting on warmer clothes instead of turning up the thermostat, by shutting doors and windows, blocking up draughts etc[8], but personal efforts can only help marginally. The big changes have to be made at government levels, but they’re not easy. 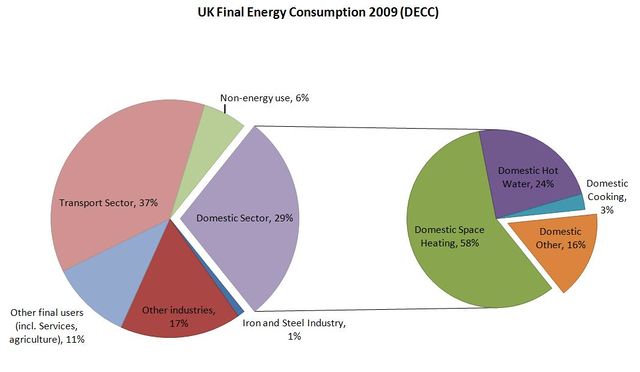 The challenge of decarbonising all of Britain's energy – including heating – was addressed by David MacKay in his classic Sustainable Energy Without The Hot Air, in which he discusses not only the various technologies available for moving to sustainable energy, but the physical potentials and limitations of different technologies, and how we can devise plans (that add up!) for balancing supplies with demand.

There are reckoned to be 26 million gas boilers in the UK.[11] The Climate Change Council wants a ban on gas boilers in new houses[12] and, with improvements in building regulations, houses could be built which require practically no heating (or cooling) at all[13], or their modest needs could be met using heat pumps. However, new houses are only a tiny proportion of all our housing, and most existing buildings were built to far poorer standards. Improving their insulation and draughtproofing can significantly reduce their heating demands, but nowhere near enough to eliminate the need for heating at all.

Could we replace oil and gas boilers with electric heating - perhaps using heat pumps? In France a lot of heating is electric, but they practically decarbonised their grid decades ago with cheap, low-carbon nuclear electricity[14]. In Britain we’re not even on course to replace our existing nuclear power stations as they reach the end of their lives[15], let alone to massively expand our clean generation capacity. Wind provides useful amounts of clean electricity (although solar is little use in the winter, when demand is highest[16], and other clean renewables are limited in potential and, as yet, poorly developed). We can also decarbonise our fossil- and biomass-fuelled power stations using carbon capture and storage, but we still have a huge job to even decarbonise our existing electricity supplies. Generating lots more clean electricity for heating (and upgrading grid capacity to get all the extra power to where it’s needed) would add further to the challenge[17]. Not to mention that electric boilers and heat pumps are very far from being a drop-in replacement for the common domestic combi boiler[18].

An approach being tested in the North of England[20] is to decarbonise our gas network. Natural gas coming ashore from the North Sea would be split into Hydrogen and Carbon Dioxide by a process known as Steam Methane Reformation (SMR)[21]. The CO
2 would be pumped back into disused gas reservoirs deep underground while the Hydrogen would be fed into the existing gas pipe network (and salt caverns for temporary storage) to feed modified cookers and boilers in homes and businesses. 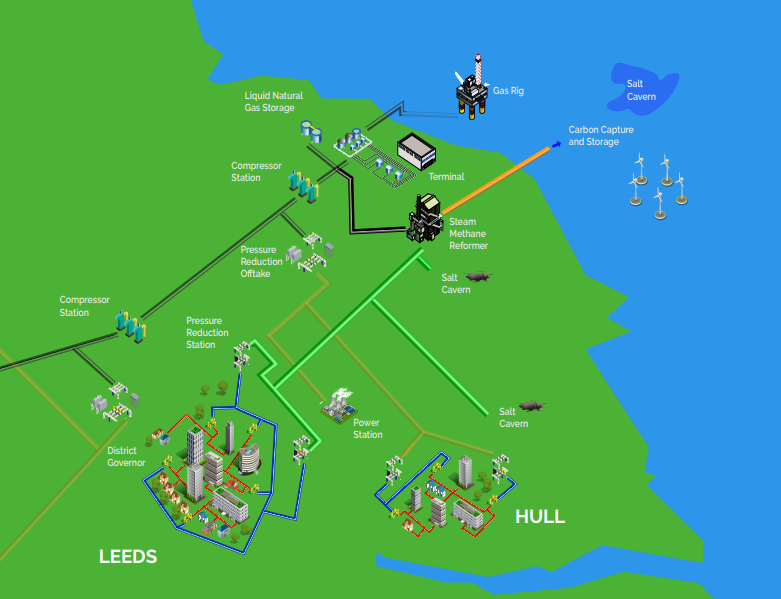 It would require a massive conversion effort, but we did something similar between 1968 and 1976 when we converted from town gas (which was a mixture of mostly Hydrogen with deadly Carbon Monoxide) to “North Sea Gas”.[22]

Converting the grid to Hydrogen could have the extra benefit of making Hydrogen readily available for uses such as decarbonising rail[23] or even some air transport[24].

Also, having a national Hydrogen network with some storage capacity available could help with the problems of integrating larger proportions of variable renewable energy (VRE) such as wind and solar, and baseload capacity such as nuclear, into the electricity grid. At present when more energy is being generated than is needed some has to be thrown away, but it could be used to split water by electrolysis to generate Hydrogen, which could then be fed into the gas network. (Converting electricity to Hydrogen in this way is quite inefficient, but is probably better than wasting it[25].)

Whatever approaches this country chooses should be informed by the appropriate science, engineering, economics and other experts. However the necessary actions are likely to have significant effects on the public, and need popular support to be accepted. In our current political system we have, at national level, as little as one vote every five years, and for many of us those votes are rendered practically meaningless by our antiquated "first past the post" voting system. History shows that although we have had more than 30 years clear warning[26] of the issue of CO
2-induced global heating, successive UK (and international) governments have done little or nothing about it[27]. Furthermore the momentum for action tends to have been subject to the priorities of the government of the day, whilst the climate crisis has continued to escalate without regard for political whims and expediencies. We need a way of getting effective actions on climate and sustainability problems; actions that represent the informed consent of the public, and aren't subject to the short-term restrictions of 5-year governments and the ideologies and compromises of party politics.

The approach demanded by Extinction Rebellion is that the government should set up a genuine[28] Citizens Assembly, representative of all sections of society and with enough time and resources to make well-informed decisions on behalf of the country as a whole, binding on the government to enact.

The report envisages the involvement of citizens' assemblies (or juries), but merely as part of "engagement, acceptance and awareness raising"[29], suggesting that the CA's role should be just to sell an already worked out package of technologies, pricing and timescales, rather than to determine such factors.